Sex Mapping (Across the Universe) Part 2. - The funner bit.


Gender based sexualities: Relatively fixed patterns of sexual attraction to one gender or another or both that give us the labels of homosexual, heterosexual or bisexual. 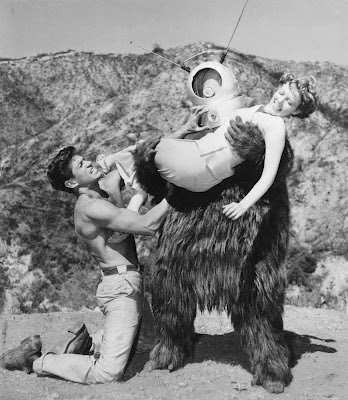 In my last post I conducted a rudimentary deconstruction of gender based sexualities. I tried to show how the origin of this type of classification was to contain and reduce sexual behaviour that went against patriarchal gender organization. I rushed through a lot of information. If you want to read more I would recommend tracking down some of the writings of Denis Altman. I don't think I said anything outside the mainstream of sociological views of the western history of sexuality however.

I ended that piece promising fun and I hope I deliver with this post. To begin with lets return to the gender based sexualities. Sometimes these are referred to as boxes. You fit into either homosexual, heterosexual or bisexual. That’s a bizarre construction because bisexual is really just a box for those who don’t fit the other two. It seems strange to make it a type when it is more of an anti-type and it feels to me like its purpose is to contain in its own box the very fact that the boxes don’t always work. Think about it, how bisexual is an average bisexual? What box fits people who are a bit bisexual and bit monosexual? Bi-bi-sexual?

The category of bisexual indicates that lots of people struggle to find themselves in these discrete boxes. There are sometimes traumatic exits and entries into different categories. One way of reducing that trauma is to knock the sides of the boxes to produce a spectrum of sexuality that looks like this.

Now we can inhabit any number of points along the spectrum. We have gone from three to a potentially infinite number of categories (Eg. “mostly both but a little more into guys”.) I still feel though that a map of sexuality that looks like this is too colourless to correspond to my world. People are spectacularly diverse and a single line doesn’t seem to capture that at all. The artist in me recoils. Is this how one dimensional the world looks to you?

In my last post I described how for some people gender based sexualities describe a deep truth. For those people a relatively fixed point on this spectrum makes sense.

Then there are those of us who are more amenable and responsive to what culture is determining about sexuality around us. Or to put it another way, we meet a lot of different needs with our relationships and some people seem to be better able to adjust what they find attractive to what meets those needs. I’m thinking of the women I know who genuinely had wonderful lesbian relationships in their twenties and thirties but now heading past forty find they are predominantly attracted to men. Sometimes these people get maligned for being fair-weather lesbians; ie. now that they are out of university and toting nappy bags at play groups they seek the respectability of heterosexuality. I really don’t get why that is maligned though. It seems like a “smart” sexuality to adapt to social circumstances beyond your control. Indeed it seems like we all do something like this – turning down the hottie with the right genetics because they have a gambling problem for example rather than continuing our pursuit based on a fixed sexuality. Some people just seem to be able to adapt more effectively in regard to the gender pattern of their attractions.

Such a changing sexuality only warrants criticism if you presume that for all people there is an innate and fixed gender based sexuality that they are betraying. That to me is imposing a map onto people rather than mapping from people. That’s why if I was to map sexuality I would have to add at least one extra axis. 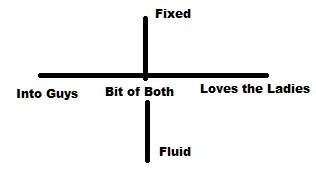 Now we’ve effectively doubled the positions a person can occupy with their sexuality. (Double infinity is a lot!) Some people might identify as fixed, will always prefer one gender over the other and no amount of cultural change will affect that. That explains the people who were gay and lesbian in the nineteen fifties for example. Other people (like myself) have a preference but experience shifts in their lifetime.

Note: Recognizing fluidity in some people’s sexuality is not an endorsement of proposed therapies to turn gay people straight (or vice versa if one exists) and not just because fluidity doesn’t appear to be universal. Something can change (the seasons change for example) but therapies can’t honestly claim to direct that change without any proof. Besides you can’t fix what isn’t broken.

Some people who will have stopped reading by now. Those who have left may be bored by talking about sex or even by sex itself. For them the notion of a identity rooted in sexual desire is profoundly disinteresting. Yet how do they place themselves on the single line or even our dual axis map of sexuality? They can’t. There’s no place for a person to simply respond with “Don’t care.”

I actually consider that to be quite a large flaw with our sexual map. The value of a system of identification is diminished if people are obliged to pick any category over no category. How do you establish the worth of their choice? To remedy that with our own model lets step into the third dimension with an additional axis. 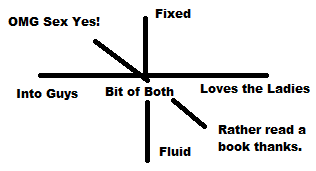 There are now so many more markedly different points a person can occupy. With our two new axis we have opened up spaces that had no place on the original single line. I think that makes it harder to construct a normal category. In a whole classroom of hormone-addled teenagers there may still not be two people in exactly the same place. I hope by now there are already some blown-minds contemplating a three dimensional sexual identity. My partner and I were on interestingly different points ourselves. Where are you?

Try and imagine an outer layer to our sexuality sphere. In that outer layer there are people who are extremely fixed or fluid, preferring one gender over another, and into sex over reading or reading over sex. Let’s call them extremes. In the core of our sphere are the absolute moderates who are a bit of both in all three categories. Imagine if those were two boxes (instead of homosexual and heterosexual). It’s a very different way of looking at the world.

But we can go further. If the limits of our graph (and our three dimensional world) only permit us three axes we ought to ask ourselves if the ones we’ve chosen are the most important ones for ourselves. Particularly if we drop the gender based line we move radically away from the original gender based sexuality scheme. We can now formulate a language of sexuality that is almost completely alien from what we are usually given to work with. I think that’s a great exercise even if we return to the gender based axis as more personally useful. We will have opened our mind to very different ways of identifying our own and others’ sexuality.

When I was in Canada for a year I found it interesting that more people there identified their sexuality in terms of the type of person they wanted to be in a relationship themselves (rather than by the object of their attraction).  If someone told me about a new lover in Canada they would often say things like “they make me feel confident and happy with myself or I’m constantly on my toes and have to keep my wits about me or they make me feel strong and protective or safe and protected.” In Australia however people tend to talk about a new lover entirely in that lover’s attributes; “they’re funny, they’re ruggedly handsome, they’re a brilliant dancer, they bake a great muffin” etc.

When we switch our horizontal axis out we might want to change it for something that is more about us than our ideal partner. Using this graph as an example, who might you be standing next to, that previous graphs put you opposite? 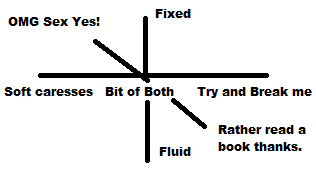 Maps like this allow us to express natural sympathies that exist amongst people that are traditionally grouped apart. My mother once complained about the tawdry immodesty of Sydney's Mardi Gras. I told her that there were would be some lesbians and gay men that shared her feelings. Similarly you can be a Mills and Boone romantic waiting for someone to sweep you off your feet with rugged intensity - whether they are your own gender or not. Or you might find that nauseous. Why shouldn't we map sexuality along lines such as these rather than a line that may not say anything about what's most important to us?

Sexual identification is something that goes on in our society. We cop it and we do it. Originally it began as a tool to aid patriarchy but it has evolved into something else and it is still evolving. Where will it go next and what do you want to call your own sexuality? The implications of a society whose members are able to do that with unlimited variability are unknown and exciting.