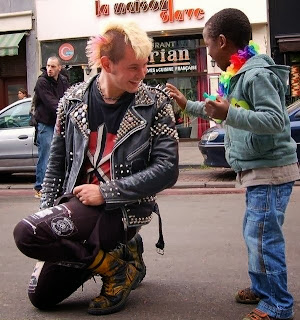 This is a piece about punk philosophy. It even gets to the topic of parenting eventually. Firstly I want to acknowledge that I’m being imprecise in my use of the word punk in terms of musical genre. I’m including some bands as punk that wouldn't probably make an official cut based on look and sound. For that matter I don’t mind Pink but punk she aint.  She just has the look.

As the Dead Kennedys sang in Chicken Shit Conformist;
“Music scenes ain't real life
They won't get rid of the bomb
Won't eliminate rape
Or bring down the banks
Any kind of real change
Takes more time and work
Than changing channels on a TV set.”

My aim therefore is to tap into the punk way of being in the world rather than merely its use of fast guitar or hair style.  I want to investigate the punk values which punk styles are merely expressions of.

That said, I’m not just using punk as a friendlier word for anarchist. Anarchist philosophy can be dry and academic. It can (I think wrongly) be about some top-down design of a perfect society. Punk is not that. Punk is reactionary, emotional and raucous. Punk, like other romantic movements, is more concerned with authenticity than outcomes.

As much as we can say that punk is more than just a sound, we can’t say that punk isn't about making a sound or about performing. Punk is public. While punk is not just a copy-able fashion trend, the on-show attitude is not irrelevant either. That’s why I’ve looked to bands as my primary sources for this topic.


When I learnt that Buddhist monkswere involved in the persecution and killing of Muslims in the I felt heartbroken.  Buddhism is called the path of compassion. I cherish the ways that Buddhist thought has illuminated that path for me. In particular I aim for a love that can acknowledge the impermanence of all things without retreating.

If Buddhism is going to miss the mark around justice I would see that happening through taking a philosophical disinterest in material suffering too far.  But what’s happening in is Buddhist-branded ethnic nationalism. That’s a nonsensical travesty– nationalism has to be one of the most material and frankly least naturally Buddhist of any concerns.

Thank the Buddha for the punks of Burma who are taking a stand against the violence.  Groups like No U-Turn or the Rebel Riot band are outsiders in their society with only recent changes making punk music or dress less likely to get you arrested. That outsider position protects them from co-option. They have no interests to maintain and no political favors to return. As they say "They can arrest us, we don't care....Or we can be attacked by certain groups. We don't care, We've prepared ourselves for this mentally. But we want to speak our minds."

To say that these punks are more Buddhist than the official Buddhists around them isn’t an original idea. The conflation of Buddhism and punk is the topic of Hardcore Zen and other books by Brad Warner.  It’s now being made into a movie. Particularly in the zen forms of Buddhism there are a great many concepts and ideas that lend themselves to a punk philosophy.

The adage that a person must kill the Buddha if they encounter them on the road to enlightenment is similar to the punk/anarchist ideal of “No Gods, No Masters”. In fact the Buddhist story is probably an even “punker” way of putting it.  It ought to be a story that inspires an inability to be dissuaded from enlightenment. But in today the practice of remaining undistracted from the path of compassion by the trophies of impermanence is coming easier to those clad in leather rather than robes.

Around the globe from , Pussy Riot is a feminist solidarity group which gained notoriety for performing a punk prayer in the Cathedral of Christ the Savior in . For this act some Pussy Riot members are currently imprisoned. Pussy Riot members like the imprisoned Nadezhda Tolokonnikova can speak for their ideas far better than I can. They remind me of the Guerilla Girls  with a much broader politics. In fact they are closer to the also masked Zapitistas in their general critique of capitalism and culture.

If you caught the snippets of the Pussy Riot action that our Western media bothers to show it may just seem they were disrespecting the sanctity of a church. This might incline us to make sense of them in terms of Western cultural wars between small l-liberal feminism and right wing Christianity. Less well known is that they took over the church in order to appeal in “punk prayer” to Mary who is seen as the patron of . Pussy Riot’s appeal to Mary was to get rid of ’s dictator-President.

In the short youtube video “Holy Shit”, a young woman makes the point that the Cathedral really isn’t a Christian site but just one in which the powerful take photo-opportunities. The sanctuary and tabernacle function as useful backdrops for corrupt politicians and businessmen. Another woman, an orthodox Christian herself, expresses support for the Pussy Riot action as a reaction to the abuse of their power by the Orthodox Patriarch to support Putin’s dictatorship. (2:28)

Like The Rebel Riot bands’ relationship with Buddhism, Pussy Riot could be said to express the reality of Jesus message better than the church they supposedly desecrate. In fact it brings to my mind probably the punkest image I know, Jesus kicking the money changers out of the temple.

Pussy Riot’s actions communicate with the Russian people on so many different levels, in ways that reclaim, subvert and refuse traditional categories. I think they’re fully aware of this and very sophisticated in their use of symbols. I encourage you to take a further look at what they are doing under a hostile government.

So that’s two contemporary examples of political actions that I am in awe of. They represent, better than the old religious and political institutions around them, values I cherish. Neither of them have swallowed the hypocrisy medication. Both of them fall under the banner of punk.

Also in less dramatic ways punk has fed me philosophically. I’m not a huge fan of the more hard-core sound despite loving those musicians’ ideas. The punk(-ish) bands I’ve relied on to give a soundtrack to my state of mind have included Iggy Pop, Rage Against the Machine, the Sex Pistols and massively the Violent Femmes. (That can go down on my “permanent record”.) Also sometimes nothing speaks my gospel like the hurdy gurdy of the Pogues “If I should Fall From Grace from God” I've learnt more about punk researching this topic and the house has been ringing with The Clash, Ramones and Dead Kennedys amongst others; all amazing.

How can a Punk perspective apply to my most important occupation as a parent? Punk feels like the sort of thing you believe till you have kids, then shoebox until they grow up and leave home.   When I googled this question I discovered an amazing looking documentary called the Other F word about the transition to fatherhood for some of the big names of punk.  The preview plays on the presumption that there is a contradiction between Punk and parenting.

Punk is not really violent – as Jello Biafra said introducing his performance of NaziPunks (fuck you), “Who the fuck here came for a brawl anyway?” but its certainly got that potential. Punk is explosive, chaotic and cacophonous. How does that meet a kids need for security and safety? Can there be a less punk word than “routine”?

Punk is also “drunken”, either actually on alcohol or metaphorically in its outlook.  I’m warm to the idea that such a drunken attitude is a path to wisdom. Parenting just seems to me to be the hardest place to imagine that attitude in place. Parenting for me means being present and responsive, essentially a sober mindset. How does one not cancel out the other?

I'm asking for your help in answering these questions. In my next post I want to tease out some of the lessons for my parenting that can be found in Punk. Please comment if you've integrated in any way the spirit of Punk with being a mum or dad or if you've felt like parenting is more of a double life.