No Sympathy for the (concept of the) Devil 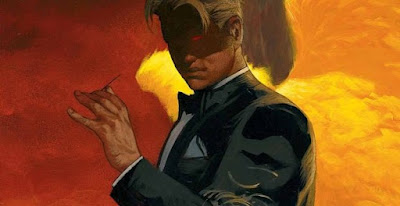 There is some hooha at the moment in the over a television show, Lucifer, for depicting the Devil in a sympathetic light. But who is the real Devil supposed to be? The word Devil is the Greek version of the Hebrew word Satan. The word Satan simply means adversary – so anyone can be a satan to a cause they oppose.  Lucifer is a name attributed to Satan because, meaning light-bringer, it was a nickname for the morning star. As thus it appears in the Book of Isaiah describing a mighty figure cast from the heavens.
In the third century BCE this reference was taken to refer not only to the Babylonian king it directly meant but also to a unique historical figure. This historical figure was understood to be the same as the serpent in the and also the adversary of Revelations who contends with the returned Jesus for the fate of the world. This is the Devil, a single male entity, who has been our adversary since creation.
Nowadays when we think of Satan or the Devil or Lucifer whether we believe in them or not it is this one immortal being that we tend to think of. They are not omnipotent like God but have some supernatural power. That power can range from the unfathomable, “god of this world”, able to establish Kingdoms and secure victory in battle, (or secure fame and recording contracts) to something much more limited – only able to possess individuals, or even merely a whisperer of dark suggestions. The Lucifer character from the latest t.v. show fits into this archetype.
But this isn’t the only way that the Devil has been understood. Their role has changed significantly over time, expanding or diminishing depending very much on broader world views. To describe the devil may even be to describe God’s animus to use Jung’s term – the repressed shadow to God’s righteousness.  It has long been my view that asking what God would be like, as the perfect object of worship, has usefulness to non-believers as much as theists, as a thought exercise. I don’t argue against the existence of God so much as I want to know what kind of God a person cares to follow. I am far less inclined to extend this merit to the concept of the Devil though. 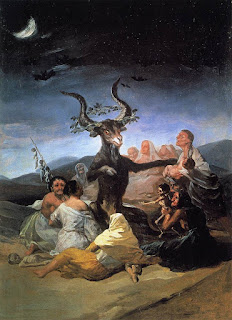 The Devil has always served as a crude political tool. The Devil gained horns and goat legs when Christianity wanted to demonise Pan worship in its first few centuries. During the Crusades both Muslims and Christians justified atrocities on the basis that their opponents served Satan. The Crusade against the Cathars, a Christian Gnostic sect, declared them Satanists too. The Reformation called the Pope, the Anti-Christ, in league with the devil and the Catholic church made the same claim about protestants. Whatever theological purpose the Devil serves seems secondary to immediate politics.
On the more local level the Devil has served humanity no better.  Both the medieval and puritan slaughter of women for witchcraft, often to obtain land from widows, found the Devil everywhere. The idea that women are especially subject to the devils seductions lingers in their oppression in churches today. Also in an alarmingly increasing trend the devil as an explanation can be seen in cases of child abuse and neglect. Brutal and at times deadly practices are being justified as the exorcism practices of the perpetrators.
I had intended this blog post to be a humorous tour of the different ideas of the Christian devil. I thought to visit not only perceptions in the Old Testament, particularly the Book of Job, and the New Testament but also ideas in popular culture. There are some ideas of the devil, as the ruler of Hell, which I find subtly funny; as if they were a middle manager assigned to the torture department of a large bureaucracy, burdened by expectations from head office. But to be honest I don’t have the heart for it.
More seriously I had wanted to challenge myself as well to find the ways in which a concept of the devil might be useful. I’ve only been able to think of two. Firstly working in addictions for many years I know it can be beneficial for some people to externalize compulsions – to disown them by attributing them to a medical condition. Maybe the devil’s influence can do this for a range of unwanted behaviours, even social problems like war and the destruction of environments.
Secondly the devil serves as a spiritual source of evil. Without this kind of a transcendent cause we might be more inclined to source evil in our animal instincts instead. Does this do justice to either evil or animals? I don’t think so; the holocaust is a uniquely human sort of endeavour. So maybe the devil has a usefulness in this regard, in recognizing evil as something that divides us from the rest of nature rather than is drawn from it.

In the end though I couldn’t see how a further investigation of the devil would reach my goal to find humour or practical benefit without glossing over far too much harm. God’s name can be found on the lips of those who speak up for refugees, against racism, and for the homeless. God is also declared by those who seek their own power over others. The Devil on the other hand, with very rare exceptions (which I might explore further another time) is declared present and powerful with the result of horrible suffering. The idea just doesn’t seem redeemable enough so I’m cutting the exercise short. Maybe the show Lucifer will be different precisely because its devil is less than pure evil and more like the rest of us.

Still interested despite my thoughts? The following clips are worth a watch;

"Did I offend you? Good." : The Perversity of Inverse Wishful Thinking.

Recently my evangelical Christian brother, and often theological sparring partner, asked a stimulating question; Is substitutionary atonement the most offensive idea in Christianity?

This inverse use of offensiveness is not unique to either my brother or his theology although it is evangelical Christianity where I have encountered this useage most commonly. When I googled “the offensiveness of the cross” and “offensiveness of the gospel” (both autocomplete entries on my google account) I received results that were only pro-cross and pro-gospel. Offensiveness was always a good thing; a measure of the truth of the message. Nobody after all likes to hear the truth.

This way of thinking has a danger. Even if nobody likes to hear the truth this doesn’t mean that the truth is whatever nobody likes to hear. The truth may be that I am not a great writer. I don’t want to hear that. I also however don’t want to hear that my head is a bum - which it is not. If we take offensiveness as a virtue too far we enter the ridiculous; “Methinks he doth protest too much” makes any opposition to our position evidence for it.

I have personally encountered Christian evangelists who take this stance. Their argument for their faith largely consists of highlighting how unlikeable the prospect of having to submit ones life to judgement by God is. It assails our pride. It is offensive. Therefore by implication all opposition to this idea is basically self-serving while believing in this idea, because it is not self-serving must be because it is true. Scary logic.

But these evangelists are sometimes mirrored by their opponents.  Who hasn’t heard the characterization of belief in God as a crutch to lean on. The implication is that an atheist universe is just too hard to bear for the religious. Again by implication all opposition to this atheism is basically self-serving whereas atheism, because it is not self-serving, means it is true.  The burden of atheism is cast as its virtue – it is correct precisely because it is unpalatable.

I call these arguments the inverse wishful thinking arguments. Arguments from wishful thinking argue for what is on the basis of what would be nice. Inverse wishful arguments reverse this illogic but are no better. They are however extreme and maybe even strawman versions of the sort of thing my brother was doing with his question. I don’t mean to insinuate that he was suggesting the offensiveness of substitutionary atonement was a proof of it, merely some kind of “badge of honour” unrelated to its correctness.

But I wondered as I read my brothers question, “Shouldn’t what we find offensiveness be a default guide to the wrongness of an idea? Not an exclusive or perfect guide but a nudge in the other direction? A negative quality, rather than a positive? In the absence of anything else to go on shouldn’t offensiveness tip us away from an option rather than make it attractive?”.

That assumption of mine seemed so culturally at odds with my brother’s question. And when I googled those phrases, “the offensiveness of the cross” or the gospel, I asked myself, “How is it that offensiveness is celebrated in every one of these evangelical Christian blogs and articles? Shouldn’t it be atheists making this claim?”

I guess I am saying that while arguments from wishful thinking are not really arguments at all they still seem better non-arguments than their inverse. It seems less perverse to fall into the trap of wishful thinking than the trap of making offensiveness into something good. Further if we are talking about God and God’s plan then maybe this permits us some entertainment that the ideal is a map for reality. If God is perfection then what would be nice maybe ought to be closer to what is true than what offends us as yucky or dumb. Even if not, doesn’t it seem sensible to err in that direction?

We seem to be generally attracted to making life hard for ourselves. Not only offensiveness  but also difficulty is swallowed dutifully as if it was a foul tasting medicine. One option over another can be discredited by alleging it is “the easy way out” or the “soft option”.  Yet surely, excluding all other factors, the easiest route is the best one to take. We don't exit rooms by the windows.

Psychologically inverse wishful thinking comes across as self-hating. Supposedly this is the me generation. This is the age of entitlement, just ending, according to some. I’m not so sure that’s true or at least we keep our self-flagellation tools close at hand. Otherwise why would inoffensive sound like an insult? Why do we extol the hard road? Yes, I see it as silly but I do it too.

Perhaps it's that the desire for the difficult and unpleasant is perennially justified. We do regularly let ourselves and others down. We feel bad about it. Thus a world that would be mean and disappointing to us would balance things somewhat. Which I guess makes inverse wishful thinking just normal wishful thinking after all.