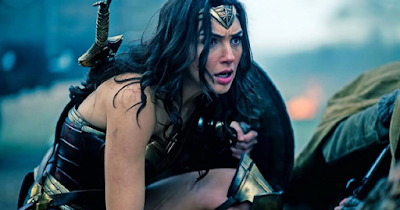 In Patty Jenkins’ 2017 blockbuster film, Wonder Woman is born with a specific holy purpose; she opposes the evil of Aries and restores humanity to their created nature. Throughout her story she brushes aside the suggestion that removing Aries won’t end all war, let alone the war around her.  She is certain his destruction will instantaneously cause soldiers to drop their weapons as if stepping out of an enchantment. While there is an element of comedy to such an unsophisticated world view, Wonder Women’s is a naivety we can’t fully scoff at. After all, the truth she needs to learn instead, is deeply collectively embarrassing for us, as well as a truth that endangers hope. Her belief that Aries alone is why humans act with depravity towards each other not only lets us off the hook, it offers a simple path to victory. It is not too different to the naiveties we often embrace ourselves.

The most obvious real world parallel to Wonder Woman’s perspective is a childlike view of the devil. According to some biblical interpretations the world is in the devil’s thrall, handed over by God to be their hunting ground as they “roam about like a hungry lion” (1 Peter 5:8). Only those who are strong in their Lord Jesus, who trumps the devil, can protect themselves from the devil’s possession. This is a fantasy that all the world faces one opponent in disguise. Worse still, this can be read in reverse to declare any opposition to either faith or just familial authority, as coming from this evil one. This simplistic idea of human evil is what we read about it in some terrible tale of a family exorcism that kills a child or in the experienced of other victims of religious abuse declared by their families as taken in by the devil. Sophisticated clever people, religious as well, scoff at the ignorance of such a totalising world view in a way that the Wonder Woman movie could be seen as encouraging.

But politics, secular politics too, is full of equally simple naiveties. The lure of simple singular enemies is strong. One such foe, patriarchy, is touched upon in the Wonder Woman narrative. If only women ran the world, maybe life could be as idyllic as a Mediterranean paradise. For some feminists of the time and setting of the film, the hoped for effect of women voting was an end to war. For some later feminists the Age of Aries with its male symbolism is supposed to be replaced by the Age of Aquarius and an ascendancy of “feminine values”. Demonstrably the inclusion of women in politics can and does improve the world, increasing the political viability of peace, the valuing of the environment and the funding of education especially for girls. Society after society has shown this. Defenders of patriarchy are peddling a disproven medicine. But there is also a naïve overreach in the hope that only patriarchy needs to be overcome for utopia to emerge.

The optimism that an all-women’s collective will have no toxic politics, or that lesbian relationships will be free of domestic violence, or that a female politician will be incorrigible, is an attractive fantasy. It gives us a simple path forward to a peaceful and just world. I remember hearing when young the speculation that generations from now we could become a humanity of one sex, reproducing asexually through technology and subsequently no longer containing our ancient code for violence in male DNA. But such utopian speculation sets us up for disappointment similar to the disappointment felt by Wonder Woman when human peace was unlinked to Aries’ death. Women betray women, just as men betray men. Gender, with respect to Monique Wittig, is primarily a set of relations between two classes and in the absence of sex to mark gender lines, new lines are created to create new classes. The partial truth at least of this can be confirmed by anyone who attended a single sex school. Biological sex is not necessary to divide the school into valued/unvalued, privileged/oppressed, key/peripheral, “male”/”female”. A single sex world is likely to simply gender itself anyway.

For my part I like to blame capitalism. I want to locate all our horrible dealings with each other as outworking of this system that commodifies everything from knowledge to fun and ultimately turns people themselves into mere capital. Racism, sexism, the destruction of the environment can all be seen as bolstered by capitalism. But just like patriarchy, capitalism is only a form evil takes. The Jonestown practice of apostolic socialism had terrible problems but none of them can be fairly attributed to capitalism. The mass murder of Jonestown members including many children is often mistakenly referred to as a suicide although it is uncertain how many chose in any way to drink poison. Certainly no infant chose anything and we know others felt they had no choice. Multiple other disappointments with the utopia of post-capitalism exist as well. Certainly figures like Stalin and institutions like the KGB show us that great cruelty can thrive in societies that reject capitalism.

Whenever we move beyond our initial naivety we are left with two choices. We are right to feel a sense of betrayal and even heartbreak. A promise of an easy victory has been broken. The Catholic Church represents such a broken promise for many who grew up there and were told that the faith was a refuge for children. So too does the Queer community for anyone who has been screwed over there despite the profession of family, while left wing activism has its own internal conflicts despite the songs of solidarity. Religions and political affiliations which cast our problems as having a singular identity inevitably come to wear the villain’s hat as well. Why not condemn everything as pointless and equally bad?

This option is put to Wonder Woman in the film. After moving beyond the first naivety that human society would become perfect without Aries, a second naivety is proposed by Aries - that all humanity is to be condemned and the best we can hope for is its destruction. The first movement is a movement beyond simple faith but a second movement has to be made to go beyond disillusionment with everything. It can be a return to a different simplicity. We can lurch from one solution to another as if now we know what fixes humanity but I consider this a disgenuine denial of reality. I don’t think Wonder Woman ends up in that place.

Wonder Woman knows that any blow she strikes will never be decisive. We who have made a similar journey out of simple faith know that any change we make to society will never be entirely enough. We know there isn’t any absolute refuge from evil. Church communities, activist communities, alternative economic systems, retreats to family or tradition, will never be perfect and will always have the potential to be abused and to let us down. If faith is faith in something as a perfect solution, then we have entered an acceptance of no-faith and yet we do not give up on humanity.

Society is not utterly depraved and in the struggle to do the right thing improvements are made. Even if no improvements occur this is not necessarily what engages us. Humanity, with its moments of kindness and passion, its concern and its actions of self-sacrifice, captures Diana’s imagination as it should capture our own. If those moments are fleeting and constantly swallowed up by greater evil it simply becomes even more necessary that we become involved in order to sustain them that bit longer. This is the sort of faith that embraces its own folly, which acknowledges it can’t win in any final way. Diana, as Wonder Woman, ends the film still a hero in our own time, 100 years later, presumably having seen both World War Two and the Cold War follow Aries’ demise. 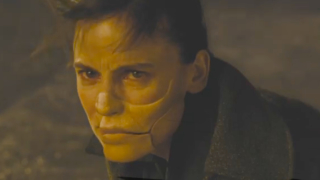 I want to particularly mention the scene where Wonder woman forgives the poisoner, Dr. Maru, rather than destroy her. This could be construed as Wonder Woman putting her faith in love or forgiveness in a way that was completely in-congruent with all the killing she did to get to that point. I agree this would be in-congruent but I don’t think Wonder Woman does make this act of faith, at least not in the sense that a pacifist does. This is one moment where the idea of no-faith or faith that acknowledges its folly is necessary to understand her actions. Wonder Woman, post her movement beyond naivety, engages in violence with no faith that this violence will be conclusive and in mercy also with no faith that this act concludes anything. In this sense she has moved beyond her destiny as god-killer, or the identity Aries offers her as God, and stands alongside the rest of humanity.
Posted by Tony at 7:10 PM 2 comments: