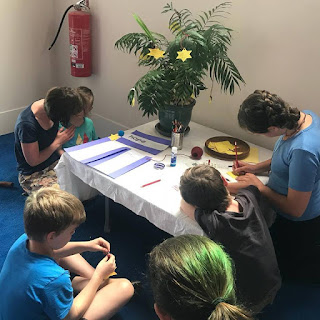 Lately I have had a falling out with Christianity. Not a falling out with Christians, family or friends, but a grumpy disappointment with the theology of it. This is a not new cycle for me and not especially unique to Christianity. I’ve invested in and then fallen out with Buddhism and the Tarot in the past. It seems like I put a lot of hope into something being the something that makes sense of everything and then, crash, it fails to support the weight I’ve given it. I then resent the philosophy for fooling me about its flaws when I know, to be fair, I fooled myself.

Non-Christian friends have asked me in the past why I put so much effort into understanding Christianity. Part of it is that I am not an ideologue about religion – despite how I may sound at times. When my partners parents are over I like to remember to offer that we say grace before dinner. And in return they have never batted an eyelid when we don’t. I don’t get angry at people who express thanks to God for saving them from a hurricane the way some non-believers do because I don’t think that person is really saying God blessed them and cursed others. I think they’re just grateful –as I would be if a flying car missed my head and my partners head and my kids heads. I also think a lot of religious concepts – even hell – are useful philosophically – even if I don’t think they are physically real. I don’t, as I have said many times, think whether a person believes in God or not matters that much. I don’t think our opinions on God’s existence need to divide us or can meaningfully unite us either.

On top of this I believe in community. I believe our society is stupidly atomized into nuclear families which are themselves disintegrating in favour of the individual. There are positives to individualism, don’t get me wrong. I think certain calls for a return to the glory days of arranged marriages as a fix to individualism are bound up in those speakers blind privilege. Long live individualism in romance. Go for it Jack and Rose (Titanic movie reference). But economic individualism is something else. When you can find families where one sibling is wealthy while another is in crushing debt, what hope do we have of ever reducing the chasm between rich and poor in wider society? Wealth inequality is the worst it has ever been in human history and getting worse. I believe it is, on a structural level, threatening our planet and all life on it. We need to all get in the same boat economically or more and more people will keep drowning.

So when I’m not an ideologue about religion and I believe in community why wouldn’t I go to church? Churches are one of the few remaining non-capitalist spaces left – ignoring for a second the huckster variants with their miracles for sale. In a church you can’t buy anyone’s approval and you can’t not afford to attend. There is a general inclination towards collectivism. When a church holds a lunch its not usually bring your own or sausages for individual sale. The food is on the table for everyone and the costs are covered by donation. If the dishes need doing then everyone can pitch in and while this can lead to women pitching in more than men that’s a charge that can be leveled at any community and it can be challenged at church. In some churches at least, there is a strong desire to tackle decisions collectively, and powerful checks on ego and hierarchy. I don’t bother with churches with a clerical authority. My time in the Catholic tradition is done. But there are those that rotate worship leaders and value discussion over preaching at a congregation. It’s like a commune of like minded people.

The one hesitation I feel when writing “I don’t” to the above generalities about Christians is that I would like to  check in with God. And by God I mean a loosely fluid concept representing “goodness”. Checking in with goodness to see if I am doing good in the world is certainly one reason why I have gone to church in the past. I am inclined to laziness and self-importance. I need to check in somehow. But checking in with goodness is fundamentally not the same as checking in with God. Or maybe it could be but while it has felt similar enough in the past to make attending church useful it now feels different enough to make sharing that checking in with Christians not helpful. I’m not so sure God, real or not, is so good.

All of this might change. I might go back to church next week and if I did I know I would be welcomed without question. There would be a morning tea of shared food and if I brought something it would be accepted and if I forgot to bring anything it would not be thought of. A group of people I count as friends would be there, noticing if I was down or bringing their own need to the group. The Bible would be consulted to seek out God’s loving plan to restore a just world. Connected to this there might be a chance to reflect on how to be a part of that plan in relation to refugees, or the environment or the neglected and isolated people in our community. Songs would be sung, lamentations over injustice, or praises of a sacrificial God. Maybe a collection plate would be passed around but without obligation or even pressure. People would ask the group to pray for themselves or for others and the group would do so without haste.

Sometimes I think some of my atheist friends think that church is where Christians go to hang out and loudly judge those who aren’t there, especially atheists. I think some services in some more fundy churches I have attended in the past resembled that but its truly not a common form. The church I have attended till recently (can I still say “my” church?) has never, ever done that. People value their time there, for themselves, as a place to challenge their own flaws, way too much. Likewise it isn’t because I think I am flawless that I haven’t been attending church. I don’t feel that church is currently the best way for me to check those flaws but if you, whatever your beliefs, think joining a church community might be for you, I would definitely recommend St. Matthews in Long Gully, . You might see me there, but I currently wouldn’t expect to. Enjoy the morning tea.