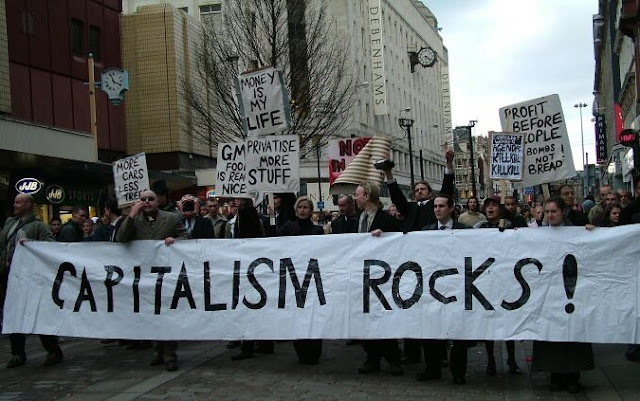 Capitalism is a workable way to make stuff and get stuff for many people. It’s also handily impersonal. The middle class and above generally enjoy the private sense of power that just handing over money for things gives them. It’s convenient and convenience is empowering in a way.

Capitalism's benefits however diminish over time. Wandering up and down supermarket aisles for the obscure milk location and figuring out how to self-scan it at the check out, it’s easy to see that even convenience doesn’t survive market concentration. Meanwhile more and more people able to work have no role to play even in providing that missing convenience. Eventually capitalism becomes stupider and stupider.

Capitalism requires a good revolution every so often to redistribute the wealth and means of production. This is because capitalist competition only exists when wealth is roughly equal at the starting blocks. However capitalism's whole reward structure is such that success in one competition is being able to bias the start of the next race in your favour. Consequently if capitalism has worked then after a few races any competition under capitalism is a sham. The only way to make it function again is to reset the scoreboard so to speak. In economic terms that is to cancel debts and break up stashes of wealth.

To avoid a revolution capitalism has tried to improve itself with a welfare system and public health and schools. These improvements give the game a longer life but can’t maintain it indefinitely. The whole point of capitalism is to concentrate wealth. It’s not a secondary effect. Concentrated wealth ultimately infects the political system (as it has ours) and then treats the public commonwealth as obstacles to wear down. Once our political system is under the control of the super wealthy, then business as usual has to be radically disrupted and the values of wealth and power reset, hence “revolution”. Nothing less can restore the basis of a functional capitalism.

The problem with revolutionary movements is that they often fall for an expectation to be utopian themselves. That is to say, revolutionary movements are expected to have “solutions” and “answers” which mean that after their “success” no further revolutions will ever be required. That’s utopian thinking. It’s alternative is a revolution which merely sees itself as a necessary reset of economic and political power – one which may be needed again and again in the future despite the solutions and answers each revolution proposes.

The Occupy movements have been criticized for not meeting the utopian obligation of political discourse. They fail to come up with answers and solutions that will last for ever. A similar non-utopian spirit seems to be a part of the Idle No More movement sweeping North America. I’m glad to see it. In Tolstoy feeds me Humble Pie I wrote about how an obligation to be utopian replaces our responsibility to love. Instead it justifies tyrants and mobs.

We need to specifically critique utopian thinking as it relates to capitalism. This is because utopian capitalism (the religion) puts pressure on its critics to have utopian alternatives. If we can show that utopian capitalism is nonsense we can alleviate the need for revolutionary movements under that capitalism to have perfect answers themselves. We can embrace those movements as merely necessary reset buttons of any system, capitalist or otherwise that we adopt.

Utopian worlds are perfect images which stand apart from reality. Firstly utopian worlds are apart from reality because they make unprecedented claims on society, human wisdom, technology, or raw materials. Although utopian worlds struggle to be realized, they still make strong claims to “work” based on some unquestioned ingredient that covers all shortages in the above resources. For example religious cults usually try and create small utopian societies based on the authority of their leaders. The leader’s unique intelligence or access to God is supposed to provide the absolute knowledge all other societies have lacked. Resolving that lack is what makes the utopian cult work unlike any past society.

Utopian capitalism's unquestioned ingredient is a magic belief that the rate of economic activity creates economic resources. The first concern of economics is the problem of scarcity. Scarcity is how economists refer to the limitations of resources in contrast to the greater wants for those resources. Trying to feed yourself and four housemates’ dinner with two sausages and rice is the essence of economics. You have more wants than resources and must decide how to manage that. That’s what being economical actually means. Utopian capitalism pretends that by moving resources around quickly they will somehow magically expand so that they will meet all wants. The fact that resources have to ultimately get expended to meet wants is ignored.

The ludicrosity (my word) of just increased economic activity overcoming scarce resources is apparent once you look straight at it. That’s why we seldom do. Instead there are vague references to technology and efficiency as the sources of limitless growth when rarely, a source is enquired after. However in practice it is the rate in which money is spent that utopian capitalism celebrates as the objective of any effort to improve the economy.

Consider what Gross Domestic Product is. It is the amount of economic activity over a period of time. The easiest way to increase GDP is just to increase the speed of economic activity related to the same basic stuff – that is to buy and sell more, between more people, more often in relation to meeting the same want. That would be like the housemates employing two to be chef, two to do marketing and one as food critic, each paying the other in a special housemate currency. GDP will shoot through the roof but the dinner of rice and two snags is exactly the same. Utopian capitalism would believe that things have improved.

Utopian worlds also stand apart from reality by foregoing a creation story. A utopian world just is. This a-historical aspect reflects that utopian visions have traditionally been the visions of ombudsmen and aldermen. They are top down descriptions of society that recognize designs, not the descriptions of labourers and artisans which recognize processes of creation. Even when any losses involved in building a utopia are recognized, such loss has to be deducted from the absolute perfection of eternity once utopia is built. Infinity minus anything less is still infinity, which is why there is often a lot of death involved in implementing utopian visions. Such death just doesn’t matter in the future utopia. 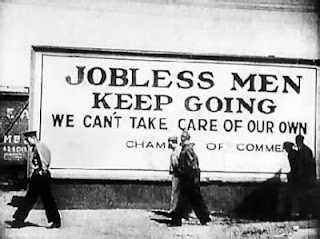 This willingness to accept a bloody creation is a part of utopian capitalism. We know that life is not good for people in poor countries whose economies are orientated to luxury goods for export. We know that even in wealthy countries untreated preventable illnesses abound, people enter lifelong debts for their education and housing (if they are lucky) and businesses routinely relocate to where labour is the cheapest and unsafest. These are treated as forgiveable hiccups on the path to utopia. However what makes this truly horrific is that utopian capitalism is always never quite here. It is always in the process of creation, and always generating costs that get discounted against its glorious future.

This endless creation phase is a consequence of utopian capitalism’s acceptance of meeting unlimited wants as a goal. In economics its been historically reasonable to assume people actually have unlimited wants because people have longed to have big families. We might accept that our hypothetical housemates only want a certain amount and certain quality of food for their own dinner and any more is unwanted however once we accept that they all want as many kids as possible then there is a very distant limit to how many resources they will need to meet all their (future) wants. It's effectively unlimited. Social changes in the west, particularly creditable to feminism, environmentalism and improved health, challenge whether our wants really are unlimited. Certainly in my own social circles there is a rhetoric that supports less consumption along with smaller families as preferable. We say we feel like we're drowning in consumables although its hard to tell if this is really reducing our consumption. This years tech products remain the standard.

Whether or not we will always want more than we have on some level however, it is not necessary to make attaining unlimited wants the goal of our society. If the definition of happiness is the meeting of unlimited wants it seems sane to suggest we need to accept some unhappiness. If the process of meeting those wants is the increased rate of economic activity then it is certainly sane to ask when that process might cause more unhappiness than it alleviates (if it alleviates anything). That kind of sanity can all be avoided with utopian thinking. Utopian capitalism promises we will (paradoxically) reach the impossible goal of meeting unlimited wants. Exactly what that will look like no-one can say but supposedly it will make the suffering all worthwhile “when” we get there.

Utopian capitalism has a method that is silly - more economic activity - to reach a goal that can’t be reached - attaining unlimited wants. My child could come up with a utopian vision that makes more sense. That is an indication that utopian capitalism is not something that we accidentally came up with. Its design is so poor that it can’t be the product of human error. It’s more likely this is a system designed by some people playing it for personal gain and then sold to us cynically as inevitable. In Australia our major political parties and mainstream media companies are all on board for the sale. It’s definitely time to reset the game.

Once we realize that utopian capitalism is the silliest of all religions we can oppose it without needing to have absolute answers ourselves. The Occupy movements and Idle No More may not be able to clearly articulate a perfect world view that will never need further correction. However no such world view is really offered by capitalism either. 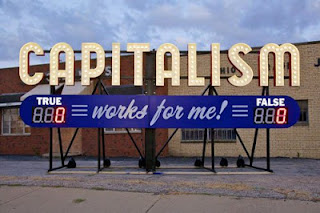