The Effects of Discrimination.

‘Discriminate’, in its earliest meaning, just meant to distinguish between two or more things. Over time, as many words do, discriminate gathered a more complex meaning. In this post I am referring to this accumulated meaning – the unjust prejudicial treatment of a person or group.

I’m of Maltese-Irish background and Australian born. I’m a cis-gendered male. Other than my loose and incomplete dentures I don’t have any visible physical disability. I did well in mainstream schooling backed by the support of middle class parents.

All the above adds up to the fact that I hardly ever face discrimination in in 2013. Now that doesn't mean I get everything I want – I miss out on jobs I apply for all the time because I stuff up the interview or the other applicant is better qualified. Sure I've copped meanness at times from complete strangers for looking too queer or non-white. I've also been encouraged to hold some feeling of abnormalcy because in only Anglo-Saxons are allowed to permanently feel normal.

None of that is really discrimination though. In my opinion, for discrimination to be worthy of the name it needs to be operating in the context of someone’s power over me – the shop that refuses to serve me, the employer who fires me or the landlord who won’t rent to me. In Australia when discrimination happens it’s often on the basis of race and put simply people of mixed Mediterranean descent like me are “white-enough” today to be free of any but the most absurd discrimination. This “white enough” status has yet to be granted Arabs and remains impossible to Aboriginal people.

Unjust discrimination however has a very different set of effects. On the one hand there is also the reduction of opportunity. Unchecked, over time or when choice is limited then that can be brutal. I recently learnt that our local Vic Roads (the only one for a large area) has a reputation for being extra tough on Indian drivers. This is in a regional town where public transport is inadequate. The risk to employment, education and recreation from not being able to get your license is significant.

Firstly discrimination takes a piece of you – maybe your ethnicity or your gender or your transgender status – and uses it to evaluate your whole person. That feels horrible, partly because you can be dragged into hating that aspect of yourself by this process and partly because your more complete self is being ignored. We should have a special name for this type of damage to a person. To encourage someone to put all of their complexity and beauty to one side in light of their eye colour or what’s between their legs for example is a very special cruelty to their personhood.

I wish our culture had a better idea of this personhood concept. We tend to think of the self either in terms of an inert psychology passively affected by external feeds or we use the word ‘soul’ which is so otherworldly as to seem untouchable. I’d rather we mined poetry a little more to remember our selves as living things – which can both recover from terrible trauma and yet fade from slight neglect in unpredictable ways. It’s this organic self that is wearied and warped by the prejudice of discrimination.

The third effect of discrimination is almost impossible for people of privilege to realize. I think of it as the bully effect. When a person is discriminated against, that means someone in power has taken the reasonable restraint off their prejudices that we all need to live together. This is an act of violence in itself but also a threat of more. 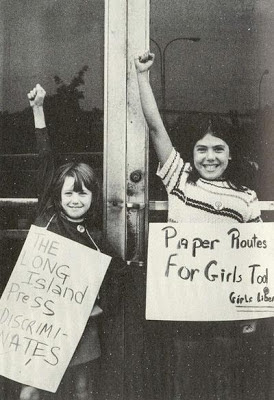 Discrimination is usually emboldened by organization. The shopkeeper knows the police and advertises in the local paper and employs other people all of which gives them a part of a community’s institutional power. Discrimination is when they use that power to shape their community to exclude you and others like you in some aspect. The threat inherent in this is that by once shucking off the restraint that would keep a person’s prejudice away from their power, there may be no end to this anymore. Today a shop doesn't serve you, tomorrow a newspaper refuses to run your ad, the next day the police beat you up.

This bully effect of discrimination is why it absolutely has to be opposed for a person to be a healthy member of a society. When the discrimination isn't opposed then a person simply isn't able to remain a member of that society without accepting their inferiority. Their membership of the society thus becomes poisonous to their personhood. Eventually their personhood has to transform to be increasingly anti-social to survive as anything with integrity with itself.

This is the point in which we can begin to decide when certain groups in society ought to be left alone in their discrimination. Are they attempting to define the whole of society? Do the make it hard for people to leave their group freely? Are they proposing that their certain group should lead the whole of society along the same path? Do they claim being a member of their group as the basis of privilege in wider society? If the answer to these questions is yes then I think it becomes unhealthy to tolerate their discrimination no matter how private their organization claims to be. The answer doesn't have to be legislation but can take the form of excluding the discriminators from our forums, our public schools, as much as possible from their victims’ lives. Essentially their bullying has to be called out because you can believe they are organizing for more power whilst we continually cut them slack. Podium sharing with a private discriminating organization is an unhealthy response.


As I've said I have rarely endured discrimination like this. It has however happened recently but the rarity of this event makes me reluctant to make a big deal of it. After all there are people who get their guts kicked daily. What about the people of Indian background for whom Vic roads is extra tough? For those of us who aren't Indian that statement could be read and shortly after forgotten. We could consider it a shame and that’s about it. For Indian people those words a solid page ago are still stinging. It is still coiled inside them, causing their personhood damage. The lack of response from others, the complicity with which the broader community interact with Vic Roads, is continuing the harm.

In light of this injustice does it matter if I cop some singular discrimination? Is it selfish of me to put my rare issue onto this blog when I have said so little about the discrimination others experience in my home town until now? Or should I, in fact must I, speak up in order to restore my healthy belonging to my community? I think the answer to all those questions may be yes.

I may not write about my particular experience. I don't know if I can do it calmly enough. I don't know if the public nature of a blog is the best place to raise the topic either. Ideally I'd like to figure out a response to my discriminators that springs from a peace work approach. An angry blog might undermine that. As I couldn't let it entirely rest I wrote this piece.
Posted by Tony at 11:19 PM