It has come to light that ordinary citizens of western governments are the real target of their anti-terrorism powers. The wake-up call for those in who voted for the Patriot Act has been the release of information about government surveillance by Edward Snowden. Even relatively conservative news outlets are reporting;

If there is one thing we can take away from the news of recent weeks it is this: the modern American surveillance state is not really the stuff of paranoid fantasies; it has arrived. – The New York Times

I don’t agree that Government spying on its citizens has “finally” come to light. Ignore the fresh astonishment of the short media cycle. This is hardly a new revelation. It has nothing to do with an over-reaction to 9/11. That is merely its latest excuse in much the same way that Reds under the bed once drove McCarthyism.

Here in , domestic surveillance of ordinary citizens was publicly revealed long before any planes flew into skyscrapers. In 1997, the Age Newspaper revealed that a multitude of groups had been infiltrated by the 'Protective Security Intelligence Group', a division of the Victorian Police force (previously the “Special Branch”). The groups infiltrated included Greenpeace, the Council of Single Mothers, Koori Information Centres, and that dangerous society, The Friends of the ABC, amongst many others of equal threat. Undercover police were even involved in producing Radio programs at stations like 3CR and Triple J. (Fitzroy Legal Service, 2012)

That’s only the unpunished actions of a single state police force. Above them we have ASIO, The Federal Police and the Defense Intelligence Branch. They are assisted by such private organizations as NOSIC who admit to looking out for “emerging patterns and trends in activism”.  While ASIO’s own website states that “ASIO does not investigate lawful protest activity” one wonders how you find out if protest activity is lawful or not without investigating.

Here is one example of ASIO breaking this pinkie promise to us. In 2005 an ASIO assessment was used to refuse a visa to Scott Parkin, a peace activist and community college history teacher. Not only was Scott not allowed to engage in the perhaps explosive public talk schedule he had planned in but he was detained in solitary confinement for five days. Upon landing in he was informed that he owed the Australian government $11,700 for his imprisonment and flight home. 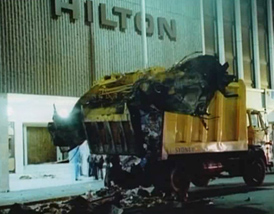 For people with slightly longer memories its worth recalling exactly how ASIO was officially given its responsibility as our country’s chief investigator of domestic terrorism. This occurred in 1979 after the Sydney Hilton Hotel was bombed the previous year. The bomb blast was during the Commonwealth Heads of Government Meeting. Before it, there was serious consideration of whether ASIO would continue under a Whitlam government. After this unique event in our political history the organization was given a fresh direction to look into groups with a potential for politically motivated violence.


There is good reason to suspect that the Hilton Hotel bombing was in fact engineered by ASIO.  The ABC has produced a documentary airing these suspicions and the evidence for them. In a rare show of bipartisanship the parliament has unanimously called for a joint state and federal inquiry into the bombing both in 1991 and 1995. This was refused by the Hawke-Keating Federal Governments. The perpetrators of the Hilton Bombing have never claimed responsibility or been identified.

All of this is fascinating history but from an activist perspective it isn't necessary. The paper trail that reveals our spy-state is incomplete but it only confirms what is evident on the ground, at actual blockades for example. Here the use of Agent provocateurs is recognized as a long standing tactic to end protests. An Agent provocateur is simply an undercover state operative who, pretending to be a protester, deliberately acts violently in order to create the justification for police action. This phenomenon is well recognized in activist culture; it is a kind of joke that if your protest planning group includes a white adult with no facial tattoos who proposes confrontation with police, then that person is probably a cop. There are even attempts to expose the regular infiltrators ( here and here). 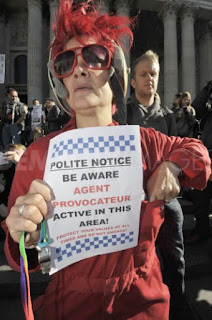 To appreciate the functionality of Agent provocateurs you have to consider how immensely difficult it is to break up an actual peaceful protest. Obviously to get an environmentalist out of a tree-top in an old growth forest, or to move Amnesty International members from the front of a Nike store takes some force, if they don’t want to go. The police are in a bind, obliged to enforce the property rights of either loggers or shoe sellers but also obliged by political interests to ensure that protesters don’t gain the sympathy of the wider public. No police chief or minister wants to see “regular citizens” capsicum-sprayed on television.

An agent provocateur is useful in two ways. Firstly their intemperate politics alienates many people. If they can become a spokesperson for a group then they can really damage its wider credibility; a lot more people will support fair trade than will support the bloody overthrow of capitalism. That gets rid of the “regular citizens”. Secondly agent provocateurs provide the legal excuse when drastic police action is required. Have you ever seen a protest on the news that was peaceful on Monday but on Tuesday attracted “hooligans” that wanted a street battle with police? Notice the media informing you of the necessity of police action given the change in the protest’s culture? When the arrests happen where did those hooligans go?


Activist groups have responded to the threat of agent provocateurs. On a basic level using shop stewards and marshals can be effective barriers. Direct action groups in particular have also developed attempts to organize into affinity groups. The history of such organization can be traced back to the 19th century however it spread across the western world after its success in organizing the U.S. Seattle protests of 1991. Protests at the G20 in , and the World Economic Forum in also used affinity organizing.

Under an affinity group model everyone engaged in a protest organizes themselves in small groups of friends. Those small affinity groups co-ordinate quite successfully without any central authority using large meeting procedures derived from anarchist principles. Basically nobody, not even a majority of affinity groups can dictate anything to a single other affinity group. Each group merely talks about what their affinity group is willing to do for the protest i.e. provide first aid, record information for legal defenses or so on.


The bonus of affinity groups is that everyone knows each other in each one. One affinity group might have played Dungeons and Dragons together for the last ten years. Another group might be a share house or a group of work colleagues or a book group. These people intimately know each others’ strengths and limitations enabling more creative protesting than a large group can plan for. Importantly these people are genuine friends making their affinity group highly resistant to infiltration.

Affinity groups also make the whole protest resistant to agent provocateurs. When a single state operative pops up in the middle of a blockade and tries to move a protest towards violence they stand out for being alone. They also stand out because they are trying to affect more than just their own friends – of which none are near them. I have seen affinity groups organized so successfully that undercover police are laughed out of blockades before they can provoke anything.

When the world trade towers were brought down affinity group organizing became decidedly less popular. Part of this was the war footing that the western world was shifted to. War always obliges citizens to get behind their governments. The patriotic propaganda machine of George Bush Jnr’s “You’re either with us or against us” began to wail. Public protesting became muted. This is despite the fact that as the Banking Crisis shows corporate greed didn’t take a break for war.

The war on terror also created an environment hostile to affinity group organizing in particular. This is because affinity group organizing looks and feels like the organization of terrorist groups. Both are cellular, both are vigilant about surveillance and infiltration and both are orientated towards action – they plot and plan to do something. I remember when the world trade towers fell feeling the fear of what the would do next. Nobody wanted to look like they were doing anything at all like terrorism – like meeting secretly to discuss even the most peaceful political action. Guatanamo Bay and secret renditions were underway after all with mixed public approval.

The War on Terror is now many news cycles old in . The recent Boston Bombing is only partly being understood as a terrorist action. The surviving suspect will be tried under criminal law rather than as an “enemy combatant” and the crime seems less motivated by politics than by their personal alienation from society; the Chechens look to as the enemy of their enemy, 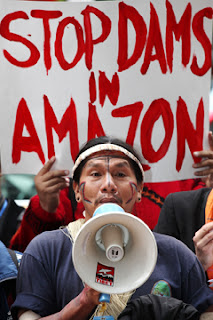 Since the war on terror began we have had the Global Financial Crisis occur. The phrase ‘too big to fail’ has become a measure of corporate hubris. The 99% and Occupy movements are very reminiscent of the pre-2001 anti-globalisation movement. There is the very same reclamation of space and an indefinite timetable. There is an appetite for discussion amongst themselves more than with the media or the government. There is the same broad appeal to people outside of the usual activist circles and those people are encouraged to organise in affinity groups.

We are seeing the limits of government control being tested by ordinary Turkish citizens at the moment. We’ve also had the Arab Spring as a demonstration of people power. Both Muslim and Christian people are refusing to be thrown against each other and are instead identifying common oppressors based on peace work forged in political struggle. The Bush-Al Queda war is being recognised as a distraction for all. Activism seems viable again.

There is an Indigenous poltical awakening across the whole American continent particularly connected to environmental issues. Idle No More in Canada and occupations in Brazil are the highest profile actions. This is part of a global recognition that our governments are not going to save our planet. The natural explosions of Hurricane Katrina in 2005 and Hurricane Sandy in 2013 have been the two most expensive storms in history. The Head of the National Centre for Atmospheric Research, Kevin Trenberth has connected both these storms to global warming by predicting a future in which they can be expected more often. Then there is the world wide endangerment of bees. Honestly I can’t even type that without feeling panic. Direct action to create change particularly to do with concerns like Fracking and Monsanto feels supremely relevant.


This is the context in which the huge coverage of surveillance programs like Prism makes sense. The challenges to global capitalism from the movements of the late 90’s are going to be heard again because they have to be. Intercepting and ultimately manipulating personal communication is necessary to control such activism. Small affinity groups are too hard to infiltrate and co-opt in the usual way.

Affinity organizing and counter-terrorism strategies are like two enemy technologies evolving in relation to each other. That isn't to say that there aren't some real terrorists around to justify programs like Prism. It’s just that governments have never been interested in the distinction between alleged terrorists and all of their citizens. 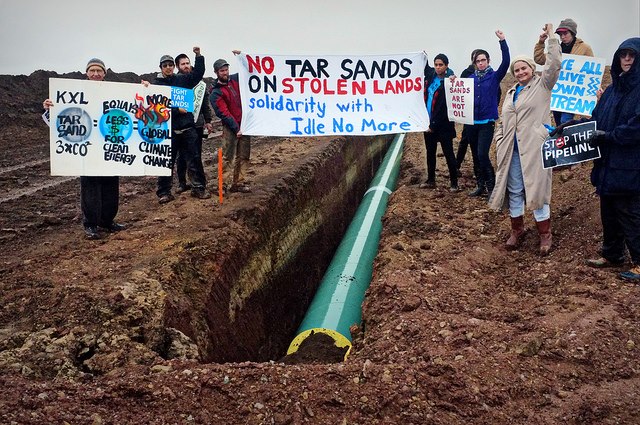