A preferential option for the poor. 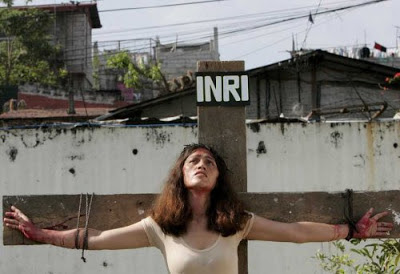 I was recently asked why I often write within or at least around a particularly Christian mythos. It’s a legitimate question. It also has three distinct answers. I’m going to give the most important one, a qualified defense of Christianity, and leave the other two shrouded in mystery. Perhaps I’ll get to them another time.

Christianity is a highly literalized religion. Something in the majority Christian psyche from as early as we have records has been unable to hear phrases like the Son of God without having to imagine a male God literally impregnating a woman. I find that ridiculous. Similarly there are stories of Jesus calming storms, walking on water and even raising the dead with the strong suggestion this could be done by his followers. Given that Christianity did not usher in an era of miracles in which the boat and medicine became redundant I likewise consider these stories symbolic.

There are many ways in which my attitude to the miraculous events of the Christian bible put me outside of normal Christianity. I don’t consider Jesus especially and uniquely the Son of God. I don’t think I can talk to him today in any normal sense of talking. I don’t think Jesus’ triumph over death means they are alive now. That also means that I don’t believe that you and I will be able to chat in a billion years in heaven (or in the other place). You and I will be as dead in a billion years as Jesus. Meanwhile Jesus’ biological father, possibly Joseph or possibly some random raping roman soldier will be even deader.

Given the literalism of Christianity and my statements of belief in the above paragraph it’s pretty simple to say I am not a Christian. The cracks in that certainty appear when we start to ask “what is God?” If God is some very special personage akin to Zeus then a literal Christianity with a literal impregnation of Mary makes sense and can be easily disagreed with. But if God is in fact a symbol (Paul Tillich calls God “the symbol of God”) or, as I have referred to God, a “moral field” then Jesus being the Son of them means something much more interesting quite frankly. It means that Jesus is the image of that morality. His life supposedly points towards it most accurately. Jesus is the human incarnation of the mindset of God.

In a literal Christianity an understanding of how Jesus is the son of God is supposed to inspire worship of Jesus. Jesus is set apart from us by his divine and strangely both supernatural yet biological parentage. He is not to be treated as just some teacher like the Buddha for example. He is above our humanity rather than beside us. In a non-literal christianity however the emphasis is on how we are supposed to share in what Jesus claimed as his authority. We are also supposed to be children of the “moral field”; children of love, righteousness, justice and mercy. That’s the place in which I am in conversation with Christianity.

What that conversation reveals is the stand-out quality of Christianity amongst comparable philosophies. Christians reject the neutrality of god in matters of justice. There can be no doubt that this is a continuation of a jewish heritage but it is also further reinforced in Christianity. In Liberation theology this bias of God is named as God holding a “preferential option for the poor”.

I consider this “preferential option for the poor” to be a very important quality to attribute to our “moral field”.  I don’t think the moral field is so much of a “thing” as it is a conceptualization of the assumptions that give positive meaning or sense to life. For example, the moral field in which science makes sense is one which values honesty. I’m saying that all life, including science, makes sense when we adopt the moral assumption to stand with “the poor” or more generally the oppressed and view the situation from that direction. Without that stance bullying (on any scale) for example would simply look like a “personality clash”. 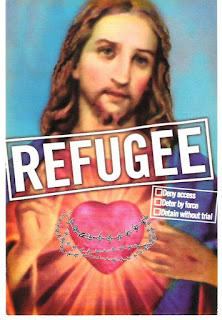 Taking this stance of applying a pro-poor filter to our moral view is not something that is arguable. It is essentially a radical “free” choice. By free I mean we are not obliged to adopt it by any logical necessity. The historical word for an assumption that is radically chosen and invested in as a starting point for any moral questioning is God. Therefore I find myself saying, using historical language, what I believe about morality is that I believe God stands with the poor and oppressed. Of all religions, in my study, Christianity is the best expression of this view.

This idea of God’s bias in favour of the oppressed is pretty mainstream Christianity. Any enquiry of popular depictions of Christianity would acknowledge that, as in the third Indiana Jones movie, the Holy Grail is actually a pauper’s cup. And of course there is the classic “It’s a Wonderful Life”. This is why I frequently praise the sort of unpolished Christianity that forms popular fiction. It preaches a sympathy with the underdog and a criticism of inequality as the definition of Christianity. While the idea of Christian humanist values can be overstated, here is the connection between our rejection of might-equals-right and a Christian cultural background. When Christian apologists argue that women’s rights, opposition to slavery, hospitals and public education have come out of a particularly Christian sense of universal dignity they really aren’t wrong.

Some Christians have, however, also opposed all these ideas. When they do so they usually occupy a stream of Christianity which claims that nature is morally teleological – that is to say that what is natural also describes what should be. This stream entrenches inequality through “natural” hierarchies; white above coloured, and men above women. It then denies the inequality even exists by claiming nature as its defense.

My view is that this kind of nature based moral teleology doesn’t properly belong to Christianity. It is not historically Jewish and it contradicts other aspects of Judeo-Christian thought. I think it belongs to Greco-Roman paganism far more naturally.

To be perfectly clear on this: The idea that men and women have different morally obliged functional roles based on their created natures (which evangelical Christians call complementarianism) makes sense as Greco-Roman philosophy but is contrary to the direction of Christian philosophy. The similar idea that natural law codifies our biological instructions for sexuality (ie. that the penis and the vagina are “meant for each other”) is also Greco-Roman. By this I don’t mean that heterosexism in Christianity comes from Greco-Roman roots, just that this particular process of grounding right and wrong in nature and creation does. These ideas are as Platonic in style as looking for moral meaning in the shape of our skulls. However these are the ideas that still justify inequality today. 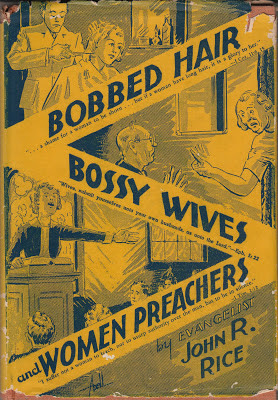 By contrast the Mosaic era condemnation of homosexuality was about its social implications for patriarchy, not its biological unnaturalness. The created order in Judaism is much more ambivalently able to serve as a template for how we should act. Even in before the consequences of our first disobedience there isn’t any stasis. At first Adam is lonely, then the serpent enters the picture, contradicting God. The apple eating also reeks of inevitability. Creation is never a perfect picture. That idea is to come much later from, I believe, Hellenic influences. In Judaism the status of the relationship between nature and the good is “complicated” and thus can’t be used to entrench inequality.

Christianity may have made a big mistake getting into bed with Greco-Roman thought. It’s a naïve project however to separate the two. was heavily Hellenised before Jesus even entered the theological arena. Paul, the apostle, whose writings compose much of the New Testament is a Romanised Jew. The notion of an original Christianity prior to the “infection” of Greco-Roman thought can never be uncovered. Instead if we want to imagine Christianity completely free of a natural moral teleology that justifies inequality then we have to go beyond it to something new.

I think it’s regrettable (and understandable) that many feminists and queer activist have jettisoned the language of God; definitely the Judeo-Christian god. In doing so, they concede their own social history. If anyone can claim rightfully to be standing in God’s current place, the claim made by Jesus, it is not church oppressors of women and queers (and queer women) but people working on behalf of those oppressed. When Christianity is viewed in its context, as a movement away from its surrounds, its progressions and arguments are continued by feminists far, far more than they are continued by Christian complementarians. 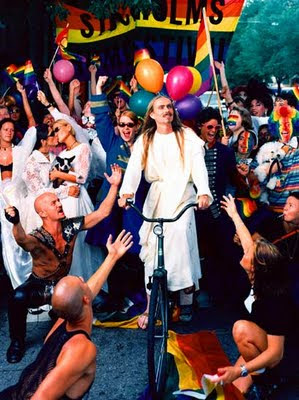 To express this on a more personal level, when I left the Catholic Church as a young man and became involved in queer politics I was only superficially rebelling against my parent’s beliefs. On a more fundamental level I was living out my parent’s beliefs in a good God who loved everybody and cared especially for the oppressed. Nowadays I think we all see that more clearly. There is something deeply healing about acknowledging my parent’s values in my life even in the places we disagree.

I also believe that myth can only be defeated by myth. Myth is ultimate reality, the realest of the stories we tell, in the sense that Micheal Polyani or Paul Tillich would use the term. (For what I mean here see the end of this post, No-one believes in Reality).

We can’t defeat the myths that support women’s divine inequality to men or the spiritual inferiority of gay love, or the holy purpose of violence with appeals to pragmatics. That kind of a counter can only distract momentarily, like offering candy to a potential suicide. Ultimately when oppression is heaven sent, the oppressed need to locate God on their side. That’s something that Christianity provides.