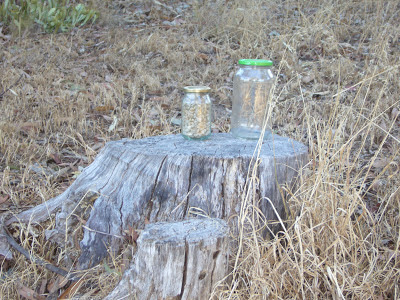 A couple of days ago I wrote a blog post about prayer. A part of that post was about the legitimacy of praying to God for a sign of their presence. I also discussed how the Tanakh (what Christians call the Old Testament) which is sacred to Jews, Christians and Muslims, positively treated this kind of prayer.

In my own response to my post I decided to fill a jar with stones. I placed it next to another empty jar. I then addressed my prayer specifically to Yahweh, God of the Tanakh. I figured that covered the three religions of Judaism, Christianity and Islam while still being specific enough. I asked “Yahweh, if you are there and real please grant me this sign. Please empty the jar I have filled with stones and fill the empty jar next to it.”

I acknowledged that in a small way this blog is an influence on others. I asked Yahweh to end my ignorance that might lead others astray through me.

I told nobody about this test not even my partner and I went to bed. The next morning I walked slowly down to the jars and was astonished. The jar I had filled was empty and the jar next to it was full. I studied it for a while but the jars had not shifted at all.

I went back to the house. The chance was tiny but I had to know for sure, so I asked my partner if she had noticed some jars in the back yard. She said no, she hadn’t. I didn’t say anything else, even when she asked me what was up. I guess I was white as a sheet.

That night I put the stones back in the original jar and prayed, “Yahweh, forgive my doubt, Could you once more move the stones from this jar to the next so that I could know that you are there and real”. This time I placed the empty jar across the yard and I placed under each jar a small scrap of paper which given the wind that was blowing should blow away if anyone moved the jars.

Then I went to bed. I was so excited I couldn’t sleep. I refused to go outside to look at the jars though so eventually I nodded off. This morning I rushed outside and the jar I had placed the stones in was empty. I lifted it up and the scrap of paper was lifted into the air by a solitary gust of wind.


This isn’t a true story. It would be cool if it was. The stones remained in the jar I filled on the first night. They are still there. The two jars now form a small shrine in my backyard to the putting to rest of a certain idea of God.

This was a real test though. I prayed the first nights prayer sincerely and approached this experiment with trepidation and sorrow. Whatever had happened something of possibility would have been lost. Then there was an unexpected joy when I visited the jars in the morning. It was like I had asked if this world was actually the matrix. The answer was that this is real; the earth, sky, my family and me are all very real. That feeling of reality in the morning amongst the gum trees of our backyard was beautiful. It was even holy.

I apologise if I fooled you and made you feel foolish for that. That wasn’t my intent. I wrote the story the first way I did so that the seriousness of the test could be received. Just imagine if it had of gone the way I’d first written it! I would’ve published what happened if the stones had moved. I’d have been read as mad in some people’s eyes; too loopy even for many theists. What a wild life that might have been!

In all the discussions and debates I’ve ever read or seen about Gods existence I’ve always thought this is really the sum of meaningful argument on the topic. That is, if the God you’re discussing is a type of God for whom a test like this can work then you ought to just test it and see. If someone is telling you that God is capable of anything, understands you in your humanity and wants to have a relationship with you then get out the jars and rocks. I've never fully appreciated why those professional atheist and theist debaters don’t just say “Hello God, are you there?” and let silence, or any answer from the heavens, resolve the issue.

Of interest to me are two points in particular. Some people won’t have believed my story even before I revealed its untruth despite professing to believe in the type of God who in the Tanakh, completed such tests. How do they reconcile that? How can they claim the truth of books like Kings and Judges while predicting from the get go that I would not find the stones moved? I’d be interested in hearing about that in the comments.

Its worth noting that Muslims believe the Tanakh is corrupted in its truth and therefore may not believe that God accepts these kinds of tests. People can also believe that God changes how they relate to us rendering these tests no longer viable. Of course not every Christian and Jew would hold their scriptures to be literal truth as well.

The second and greater point of interest to me is that this experiment of mine is of no great use to anyone else. We might think it ought to be but in practice it isn't. Suppose I had of sworn the stones moved from one jar to another. Then in order to not share in my belief in God would you have had to either explain the phenomenon in some other way or say that I was lying? What did non-theists do in their head when they read the story I first told? Probably not very much.

I'm not insulting non-theists there. After all what do believers in the God of the Tanakh do with what actually happened? Again probably not very much.

This is because, perhaps wrongly, religion has become a matter of private reality. That is why although my experiment puts to rest my belief in a particular type of God I don’t expect that to have any kind of global effect. I don’t expect people to start abandoning fundamentalist Christianity in droves now.

But if one persons’ proof is not another persons’ then how does that make religious statements (of any kind) into anything other than personal insanities? How can we meaningfully compose a shared spiritual reality in the way we work to agree on physical reality? Is there an experimental method for religion?

I think there should be some shared way of gaining knowledge for religious statements that claim to be like statements of physical reality. I think if you are going to claim that “Magic happens” for example then you ought to be able to show it happening. Likewise if you want to say that yours is a God who can be relied on to answer prayer then evidencing that reliability is not a cynical exercise. It should be an expectation.

On the other hand if your god is something that operates by inspiration rather than as a physical force then they can’t be disproven by tests like this one. If your god is something like love or justice then maybe even when they fail we ought to dust them off, prop them up again and figure out how to put our faith back in them. Maybe gods such as that are always only parts of a private reality that we have to bring into the world.

Now that’s the type of God that’s left for me. 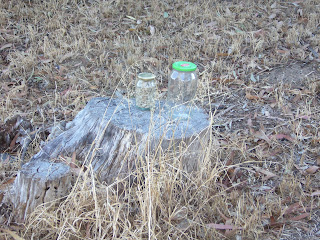