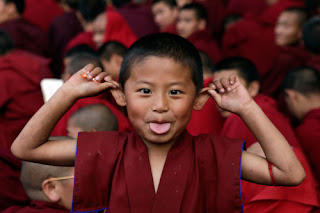 The other day I was explaining Buddhism to my four year old child. It was a follow up discussion to a visit to a local Buddhist monastery. I said “Buddha means awake. Buddhists believe that we are still sleeping even when we wake up in the morning. Buddhists also believe it is actually possible to be awake fully. They call someone who wakes up like that a Buddha.”


I chose not to say you could possibly believe both. Instead I said “I guess you’re not a Buddhist then,” with what I hope was absolutely no hint of my own preference in the matter.


Then I mentioned something I’d been wanting to express for a while, “I don’t really believe in God myself. At least I don’t believe God is a person that we can talk to or anything like that.”


I’m not exactly sure if that’s how I expressed myself. I was quite nervous actually. My partner and I have been discussing the need to have this conversation soon. We don’t want my daughter to be shocked by my beliefs. We both feel she ought to know why I don’t go to church with her and her mum. We both feel she needs to know the pastor is not the God-expert dispensing God-facts which her Dad should learn.


But she’s four; She doesn’t need to divide the world into the arguments of adults. The last thing she needs is the idea of God as a way of being right or wrong in a contest with others.


My daughter looked at me with eyes that were full of figuring out and said “But God is everywhere.”


I don’t want to fight a theological statement like that from my child. I blew her a kiss and reached out my arms. We started a swinging hug. All kids are whirling dervishes.


I just recalled to her the nice Buddhist we met and then I recalled to her her awesome Christian Godmother. Tickle torturing her collapsing form I pointed out that a person could be a nice person whether or not they were a Buddhist. I think she agreed amongst her squeals.


That night I helped her say her prayers because she asked me to.
Posted by Tony at 8:07 PM