“Remember! – It is christianity TO DO GOOD always – even to those who do evil to us. It is christianity to love our neighbour as ourself, and to do to all men as we would have them Do to us. It is christianity to be gentle, merciful, and forgiving, and to keep those qualities quiet in our own hearts, and never make a boast of them, or of our prayers or of our love of God, but always to show that we love Him by humbly trying to do right in everything. If we do this, and remember the life and lessons of Our Lord Jesus Christ, and try to act up to them, we may confidently hope that God will forgive us our sins and mistakes, and enable us to live and die in Peace.”
-        THE LIFE OF OUR LORD written especially for his children by Charles Dickens
When I reviewed Alister McGrath’s history of Protestantism, I was surprised that though he discussed protestant novels there was no mention of, to my mind the greatest Christian author, Charles Dickens whose 200th birthday has just passed. I think that Dickens is genuinely overlooked as a Christian author because his definition of Christian is so radically different from the standard. I want to explore that difference with this post.
Dickens’ definition of a Christian can be understood through his villains and heroes. Dickens villains are bitter, miserly, violent, bullies and “needless to say cowards”. They respond to the suffering of others with a cold heart or even with a cruelly glad heart. Dickens’ heroes are generous, joyous and honourable. Most importantly they respond to witnessing suffering with instinctual kindness. Their hearts are warm and they feel tenderly towards others. The distinction between these two is Dickens’ christianity.
It is rightly spelt with a small “c” because Dickensian christianity is not so much something you either are or you are not (a type of person typified by a capital “C” Christian.) It is much more something you embrace by degree. The most famous of Dickens’ conversions Ebeneezer Scrooge endeavours to be more christian much more than he does to become a Christian. Of course this can also be described as a qualitative change – Ebeneezer going from wanting to be less christian if he can to wanting to be more christian is a dichotomous reversal – but it’s the quantitive aspect that excites me.

What excites me about quantitive small c christianity is that it paints a radically different picture to big C Christianity. Many non-Christians and Christians alike understand Christianity a bit like a place you enter, an ark would be a fitting metaphor. Outside the ark is one fate (“Is that rain?”) and inside is another of spiritual preservation. To enter you need to firstly believe what Christians believe; Christians believe in a Trinity of divine persons, one of whom is Jesus who rose from the dead. Most Christians believe in Heaven and Hell and that sin (which is universal) will land you in Hell but that God’s forgiveness gained through the death of Jesus can gain you access to Heaven. Many Christians would add believing in the authority of the Christian Bible as a requirement too.

Belief itself won’t make you a Christian however.  Keeping your place on the ark requires a commitment beyond belief. Before Jesus died and rose again it required keeping the law and making sacrifices through the temple. After Jesus it requires something else. Primarily you only have to recognise the sacrifice Jesus made and your spot on the ark is secure. In practice though this can be quite difficult as there is recognising Jesus’ sacrifice and really-fully-absolutely recognising it which is incompatible with any sense of personal merit. In fact certain Christian theologies argue we are so inherently sinful we simply can’t meet this requirement adequately but must be chosen by God to do so. This description glosses over many differences between Christians but the ark metaphor is generally apt. Even those Christians who criticise the in-out model of Christianity acknowledge its existence.

In Dickens’ christianity there is no true out group. To be christian is one’s natural state and it is still visible in dim fashion in many of his worst characters. The whole joyous nature of Dickens’ christianity can be found here. The christian approaches their fellow human expecting a kindred spirit in regards to warmth and kindness. Like a naive child they envisage it buried under the worst exteriors – they seek to awaken it, to thaw it out. They put their hope in it. Small “c” christianity is everywhere, can’t be killed (or will only rise again) and belongs to us all as a birthright. Wherever it is curtailed is therefore a tragic and unnatural affair. Conditions which might crush this native christianity (such as the workhouses of Dickens’ time) are the ultimate manifestation of evil.

The big “c” Christian by contrast is theologically obliged to expect sinfulness from others. It is their common bond with every other human – that state of warranting punishment. Inside the ark is no better – sinners reside there too - however compliance with God’s perspective gives them at least the behaviour of goodness. Acknowledgement of their sinfulness is also a significant distinction. Christians sometimes make a big deal out of how there is no in group with Christianity – all are sinners. Non-Christians don’t generally think this is the case hearing in language like saved and unsaved, repentant and unrepentant a clear in-group out-group division.  As someone who knows both groups I’d say the truth is somewhere inbetween.
The ark is also a container for its passengers. The primary way the ark serves is to give boundaries and place limits lest you get your feet wet. It keeps you safe on your journey to your afterlife. Dickens’ definition however explodes the ark. In fact whoever flees their natural christianity in Dickens world flees into a container, a prison of their own self-interest, like one of the anchored prison ships of his time, not entirely dissimilar to an ark;
“...in shutting out the light of day, she had shut out infinitely more; that in seclusion, she had secluded herself from a thousand natural and healing influences; that her mind, brooding solitary, had grown diseased, as all minds do and must and will that reverse the appointed order of their Maker; I knew equally well. – Great Expectations Chapter 42
Breaking out of that prison, blinking at the light and getting connected to other people (not just other Christians) is crucial to Dickens’ christianity.
I think Dickens’ christianity is unpopular today for two main reasons. Firstly Dickens can be spectacularly inventive with his metaphysical beliefs, for example the nature of the afterlife;
The air was filled with phantoms, wandering hither and thither in restless haste, and moaning as they went. Every one of them wore chains like Marley's Ghost; some few (they might be guilty governments) were linked together; none were free.
Many had been personally known to Scrooge in their lives. He had been quite familiar with one old ghost, in a white waistcoat, with a monstrous iron safe attached to its ankle, who cried piteously at being unable to assist a wretched woman with an infant, whom it saw below, upon a doorstep- The misery with them all was, clearly, that they sought to interfere, for good, in human matters, and had lost the power for ever. – A Christmas Carol Chapter 1


This kind of poetic licence has a long and valued tradition within Christianity. The Drummer Boy is a late invention in the Christmas tradition for example. However Christians are also taught through churches build on doctrinal fault lines to cherish precise doctrinal positions. Dickens seems to rush on to the broader active implications of imprecise doctrine instead. He therefore has the freedom to use metaphysical descriptions that make his point rather than treat biblical metaphysical descriptions as bodies of fact from which doctrine must derive. Interestingly some modern scholars think this is truer to what the Bible itself is. It is probably though what costs Dickens inclusion in official church reading lists.
In addition to this theological liberality Dickensian christianity is also unpopular because of the contemporary political landscape. Dickensian christianity is foremost common decency inspired by the stories of Jesus. Secularists are engaged in separating common decency from religion altogether. Despite his de-emphasis on theology Dickens can’t be easily brought into such a project. Quiet statements of faith are not the same as absent ones. Dickens merely noted (like Mark Twain and, you could argue, Jesus) the least christianity in the most schooled theologians. But the heart Dickens considers more important than the head is clearly a Jesus inspired heart.
Neither does Dickens give any support to contemporary public leaders (such as Mitt Romney) claiming God and our basic moral principles are intertwined. Dickens’ values are just too different. Instead of relative abstractions such as the underpinnings of democracy, the intrinsic value of human life or even capitalist economic principles, Dickens talks about “gentleness, mercy and forgiveness.” It’s hard to galvanise righteous fury around these values, or to demonise your opponents from them. Subsequently Dickens is irrelevant to both sides of the “culture wars” between conservative Christians and secularists.
Despite this unpopularity I know many people that I would consider Dickensian christians. They are people for whom their childhood understanding of Jesus as the lover of the excluded is still their most treasured inspiration. They don’t abide theology or manners that separate them from that naive perspective. They are often not confident defending their definition of Christianity against other more sophisticated models. I hope this post will show them they have a champion.
But he was always merciful and tender. And because he did such Good, and taught people how to love God and how to hope to go to Heaven after death, he was called Our Saviour.
– The Life of Our Lord Chapter 3. 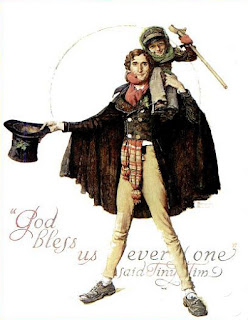