The real meaning of Christmas.

Before you read the following please read this if you support marriage equality for same sex couples. (For a while I’ll post this link at the top of each new post) 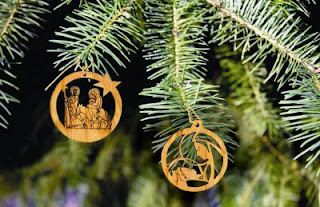 Since before record, people across northern Europe celebrated the coldest and longest night of the year with a gathering together of family. Scarce food was shared in a wintery land. This was midwinter, late in December.
Stories of death and rebirth were told around campfires. Surrounded by what seemed to be a dead landscape of barren branches and iced rivers these stories wrought a fragile hope and instilled courage. The fir tree with its evergreen foliage was a potent symbol for these people for its signs of life did not die.
Two thousand and ten years ago a child was born in a manger in Bethlehem a dry hot place that never knew snow or ice. This child was to grow up to be called Messiah and Prince of Peace. They told their small band of followers to love their enemies and to turn the other cheek. They preached of a loving, forgiving God. They spoke of the resurrection of the dead.
One thousand and seven hundred years ago the Roman Empire adopted the symbols though not the content of this now called Christian faith. This Empire maintained its armies and its conquering agenda but now carried at its head the cross instead of the eagle.
This Roman Empire had previously marched armies into northern Europe but was never fully able to subdue its people. Now it sent forth Christian missionaries. Wealth and power were offered to those leaders who converted from pagan faiths to Christianity, particularly the bloody and authoritarian Christianity which served the interests of Rome. Swear fealty to the Bishop of Rome (and the child of Bethlehem) and you will be rewarded was the promise wrapped in a garland of divine salvation.
The pagan celebrations however were strongly adhered to amongst the people. The growing Roman Catholic Church struggled to outlaw these feasts. So they chose to replace them with Christian ones on the same dates and with the same symbols; the egg for Easter, the fir tree for Christmas.
Today a southern continent that has traditionally known eight indigenous seasons and that in many parts has no winter at all now shares a holiday on the 25th December with most of the world. Complete with an introduced fir tree this holiday recognises the birth of the child who became a messiah of peace before becoming a champion for conquerors and the absent ruler of an authoritarian church.
Just like before recorded times, families gather to celebrate. Now for the most part in Australia they share in plenty – great swathes of food are wasted every year, children almost overdose on candy. The fear of the cold death around us and the need to cling to any hope we can to get through it is gone.
Or is it? Is there another “death” for this old midwinter rite to observe? We hear all the time that the “real meaning” of Christmas is dead or dying. Could it be then that the cold death around us may not be a natural winter but a spiritual one? Christmas can be seen as it was before Rome converted it. It can be used to mark the darkest hour in a time of death; rampant consumerism, gross kitch, gluttony, shabbiness, sparkle and spectacle distracting from an absence of character. Christmastime itself serves as spiritual winter.
But always fear’s greatest hour is hope’s greatest hour too. We can share what little we have of spiritual wealth at Christmas time. We share it with family and friends. The boldest of us share some with strangers. Still even to just remember family in a world in which every “contact” and “network” we have is mercantile is a radical act. At Christmas we can look for and hold up the evergreen; those parts of our culture that haven’t succumbed to spiritual death. 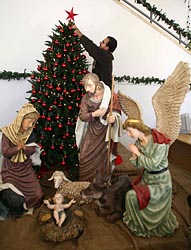 Paradoxically in this new spiritual winter the child who became the conqueror’s totem is a better pagan symbol of hope than the fir tree. Our venerance of the child is a something of life that hasn’t been killed even by it’s use to justify killing. Why? Because the child in the manger has a majesty in poverty which endures despite a season of overtime, shopping (and for children just getting.) The child speaks to the worth of us without what we have. There isn’t any contrast between the fir tree and Christmastimes’ spiritual winter. It is just one more thing to buy and to decorate gaudily.
Let’s huddle together in the spiritual cold of this peak shopping season. In a pagan spirit let’s pay attention to the child in the hay. The real meaning of Christmas is that we are never completely lost; snow cannot bury us and capitalism cannot totally commodify us. That’s the message that midwinter has always held. Everything just looks dead. Look there is still life.
Posted by Tony at 7:15 PM