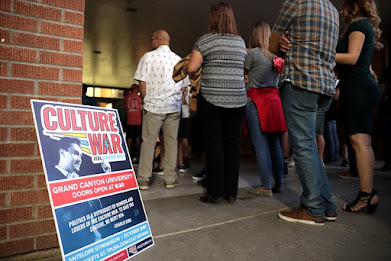 I am on Facebook. If you are not I suspect you have much more of your humanity intact than I do and I don’t want to encourage anyone to follow me into the beast. I mention this merely to lead into how one page I subscribe to on Facebook is titled “We have murdered satire and sit on it’s throne”. It’s a repository for news mostly from the U.S., that sounds like it should be satire but isn’t. Often these are reports of obvious racism or homophobia. The sentiment is very “If I saw this in a script it would be unbelievable but here it is and yet they tell you there’s no white or straight privilege anymore.” Commentators on these stories have been trending more and more over it and angry and less just smug face-palming. Why wouldn’t they when, just like me, their Facebook feed is full of how people often motivated by fundamentalist religion and self-entitlement are making life drastically worse?

An example of the sort of articles featured on this page include the decision by a Virginia school board to remove LGBTIA books from public school libraries. The boards greatest outrage is reserved for a book which they say promotes a relationship between an adult male and a teenage boy. That refers to “All about me” in which the author recounts how at 17 they had a brief relationship with a 24 year old boarder at his fathers house in 1980’s Italy. I haven’t read it but the reviews are great. Saying it promotes what sounds like pedophilia is like saying the gospels promote divine child rape because Mary is barely 15. More importantly though, “why do I care?”. I’m not Virginian. Sure I’m angry about censorship of 1980's closeted queer experiences but it’s fair to say I do seem to be wolfing down that rage with a spoon if I have to go to Virginia, U.S. to find it. It’s just, you know, these conservative Christians seem to be raising their blood soaked crosses everywhere. Poland is even worse. So my “research” tells me.

Meanwhile the winner of the Australian Christian book of the year award in 2021 (you can evaluate its bona fides for yourself here) is a book about how Christians face oppression and exclusion in official and unofficial ways across what once was Christendom. It’s a sermon preached to the choir because increasingly Christians who are plugged into the conservative and evangelical media sphere are convinced that they are the ones on the back foot. The sort of phrasing you can find from the winning author, Stephen McAlpine, is that the “sexular culture” is “hunting” for them. This same culture that is getting its books banned in Virginia, U.S., is actually more commonly, prosecuting and punishing everyday Christians who express doubt about our post hetero-sexist social norms. While the Australian federal government still preserves religious chaplains in public schools this can only be a stop gap measure until working in public schools requires an acceptance of gender diversity and homosexuality at odds with Christianity. That is the overwhelming direction of culture the book illustrates.

This world view is reinforced once you enter the worlds of right wing facebook and twitter. Orthodox Christians are cautioned not to think they can maintain a private faith quietly. Publicly they should expect to be fired without recourse from an increasingly “woke” world. Those against them are called “elites”, “cultured despisers” or some other handy pejorative that inflates their power. Politicians suggest that just calling yourself a Christian is under threat from these apparatchiks. The LGBTIA movement in particular is a monolithic monster that knows no limits and can’t be trusted on any level. Christians who question these statements are accommodating the culture. They are collaborators and suckers.

Even if we accept that some of this is a propaganda war we desperately want to know who is actually winning. Is it the Queer movement? Is it Conservative Christianity? Who is the oppressor? Who is the underdog? Each side fearing no mercy from the other makes a pre-emptive strike against the others freedoms. That strike is held up as proof of how horrible they are by their opponents justifying an overreach in return. I wonder if the people in Virginia sat down to read about the politician in Finland who has been investigated for hate speech for traditional Christian views about sexuality before they return voted to ban gay books. News that confirms our biases is not limited by mere geography for either side. Your favourite site will hoover it all up for you and leave contradictory evidence behind. I honestly believe, without wanting to suggest that these are not important issues, that this is how they are getting us to ignore climate change. This culture war is the preferred topic for elections by the true moneyed elites.

I had a go at disrupting this march to war. I held a talk at my church (my old church I guess) about Queer History. It was both an unfortunate and a wonderful experience. I had someone come to my house pretending to represent more official consensus than they did, to make sure it wasn’t promoted beyond the church and to stress their discomfort if anyone who wasn’t an adult came. I still hear in my head how others let that happen because the topic was “fraught” after all. Fraught was where I thought we walked. It has shattered my illusion that this church is non-hierarchical or even that it can put listening for God before the churches inter-church reputation. This is hard for both sides. Christians judge Christians as queers judge queers, who are soft on the enemy. Am I this churches enemy? Are they mine? I did not think so.

I’ve let covid lockdowns give me the excuse to stay away from church. It had stopped being a place I could go with my guard down and started being just one more cultural battlefield. I guess despite all the good works it does, it didn’t feel like God was there. Or it felt like it was going to be harder work than I thought to find God there. Maybe it was fraught work? Maybe I also don’t really do fraught. Facebook doesn’t ask me to that’s for sure. There I never have to see any indication of my sides power and every indication that we are the true rebel alliance.

The Queer / Conservative Christian conflict is not the only space this is happening in. I have seen articles, and YouTube videos, in my Facebook feed that tell me Kyle Rittenhouse’s trial is rigged for him and against him. So, depending on what side your feed is on and the verdict, you will either be sure some racist cracker judge let a murderer off or that woke liberalism chose to ignore clear facts because it didn’t suit their narrative. Maybe one of those sides is true and needs to be told in which case not paying attention is a moral crime. Maybe both are true and false equally and the deeper truth is we are all being played, in which case not paying attention is the only righteous act. Probably something is true but its more complicated than we think. Seriously how would I know? Maybe I am ultimately being encouraged to switch off and watch endless superhero based entertainment instead and staying rage filled and “informed” is my civic duty. I don’t know. Remember this is a criminal trial in another country. Or forget that because that's not important. I don't know.

I do believe that anyone who refuses to acknowledge the power they wield either alone or in concert with others is destined to abuse that power. Atheists, Buddhists, Baptists, Jehovah Witnesses, Non-binary punkrockers, adult male bronies, socialist feminists, any of these groups can pretend to be only holding underdog cards in their hands. Always on the back foot and always righteously defensive is good for survival. It’s terrible for accountability.

We have also been rendered powerless in the path of a simple virus. We have compromised in our homes and made concessions with those in our bubbles assuming we have had secure housing and other people in our bubbles. The great soft food of capitalism is on sale this Christmas again with its promise that we deserve something; an overdue holiday, a new car, a reward for all our sacrifices. Somehow this deservedness is only deepened if we profited through this pandemic like God's nod to the winner of a coin toss. Forget if we were incredibly lucky. We are tired, we are scared, we are lonely, we are good people. Don’t tell me I have power when I feel so crushed. Tell that to them. Your them of course. No point, it seems, in being fraught.