This year for our Christmas party I put on a nativity play. I’ve published the script below. I aim to film a performance at my family’s Christmas lunch too. If that works out I’ll figure out how to link to it here. (It did.) Initially I had grandiose dreams of my friends as actors in elaborate costumes. It ended up being very simple puppets performed by myself and my partner.

The process of writing a nativity play is a challenge because the birth of Jesus is mentioned in two of the four gospels and is completely different story in each of those two. That’s not to say they directly contradict each other. It’s more to say that if they didn’t use names like Jesus and Mary then you might think they were about completely different people. What we commonly think of as the nativity story is a mish mash of those two gospel stories into one single narrative. Certain elements get dropped while others are considered essential. 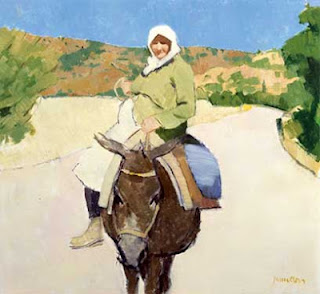 In writing this nativity play I had to think about what I considered relevant to my understanding of the story. Some content, like the words of Rabbi Hillel, isn’t from the Christian gospels. I felt I needed to show a context for the theological change that is Christianity. I think I can justify all my decisions. For one thing I think this type of writing- selective story telling to make a point - is essentially what the Christian gospels themselves are. That was first century history. Fortunately the play was well received and I wasn’t required to defend anything.

What motivated me to write a nativity was not that this is a story seldom told. This aspect of Christmas is not overlooked or forgotten so much as some commentators want us to believe. It’s everywhere. However this is a story we can easily hear without impact. Regardless of what we believe about its factuality it could be something we recognize as an amazing tale. Instead it’s sort of kitsch. It could have revolutionary implications. Instead it does nothing to overturn anything about the super capitalism that surrounds it.

I think that’s because this is a story that gets heard in one of two ways; Firstly we can hear the incarnation as saying that our lives, no matter their poverty and brevity, mean something and that the oppressed and their pain are of deep interest to eternity. Alternatively we can hear the nativity as saying that God is someone quite small, owned by Middle Eastern politics, buried in one time, and understood only by one religion’s theology. It’s a question of whether our understanding of God shrinks to fit the incarnation or whether our understanding of humanity expands to fit God.

Archaeologist : The first century was a very exciting time in history for the region we now call the Middle East. The Greeks, Romans, and Egyptians were right alongside each other. Trade routes stretched from South East Asia, to China, through India, Africa, up to Germany and across to Britain.
The common language was that of integrated philosophy; ethics spoke to physics, politics spoke to theology.  People bothered to learn the teachers of traditions other than their own. It was an expectation of even the middle classes. That brought change, particularly upon the culture of those who called themselves Israel – Gods chosen people.

Scene 2: Two Middle Eastern Women sit on stone wall – they are dressed as they might be in the First century.

Martha : Do you remember when Shabetteh and Zedek met?

Sarah : I remember it was the time when Jupiter, God most loved by Romans, combined with Saturn, their God of Royalty to signal Rome’s right to rule us.

(The woman pause and then laugh to each other).

M : Oh anything else is treason, is it not? But what I have been told…

M : No, no, Sarah this you must hear. Shabbetteh is the sign of Royalty, no doubt, but Zedek is the star of Israel. When these two stars kissed in the night sky, this was the time for a new king of Israel.

S : Martha, I know that story. For that story Rachel’s son amongst others was killed in infancy lest he become that King and unseat Herod. There are many people from around Bethlehem here. Be careful who you tell that story to. Old wounds…

M : But there is more to the tale…. (Martha and Sarah vanish)

Scene 3: Roman Soldiers stand in front of a prone and injured Mary.

Angel: Greetings most favoured one! The Lord is with you.

Angel : Do not be afraid, Mary, for God has been gracious to you, you shall conceive and bear a son. And you shall give him the name Jesus. The Lord God will give him the throne of his ancestor David, and he will be king over Israel for ever; his reign shall never end.

Angel : The Holy Spirit shall come upon you and overshadow you. For that reason the holy child to be born will be called “Son of God”.

Mary : Tell out, my soul, the Greatness of the Lord, rejoice, rejoice, my spirit in God the saviour
So tenderly has he looked upon his servant, humble as she is
For from this day forth,
All generations will count me blessed,
So wonderfully has he dealt with me,
The Lord, the Mighty One,

His name is Holy;
His mercy sure from generation to generation
Toward those who fear him;

He has ranged himself at the side of Israel his servant;
Firm in his promise to our forefathers,
He has not forgotten to show mercy to Abraham
And his childrens, children forever

Scene 4: Joseph is pulling a reluctant Donkey over to Mary who is pregnant. Meanwhile elder Jewish men listen to Rabbi Hilel.

Jewish Man : Rabbi Hillel, How is it that Rome conquers us and humiliates us, Gods chosen people?

Hillel: Because you drowned others they drowned you; and those that drowned you will eventually be drowned. But judge not until you stand in the other’s place.

Hillel : You there (addressing an audience member), Are you paid for your work?"

Audience member :… Yes I am.

Hillel : For what do you want the money?"

Audience member: For various reasons, To pay for the necessities of life.

Hillel : Would you not rather come and make the Torah -by which we mean the Law of God - your possession, that you may possess both this and the future world?"

Audience member: Can you summarise the Torah for me?

Hillel : That which you yourself do not want, do not do to your neighbor.  That is the whole law and the rest is merely commentary.

Joseph : Mary, I cannot believe we are doing this.

Mary : Joseph, It is a census, we have no choice. We must return to Bethlehem because you are of the house of David.

Joseph : If the Donkey wills it…

Scene freezes and Archaeologist appears next to Rabbi Hillel.

Archaeologist : The Rabbi Hillel teachings overlap with the life of Jesus. Born in poverty, Rabbi Hillel became the forerunner of modern Judaism. Hillels’ followers shared with the early Christians the belief that love of others was integral to understanding how to apply Jewish law.

(Archaeologist moves over to Joseph)

Archaeologist : The Census of Quirinius is recorded by Josephus, a first century historian. It was the first ever enrollment of the people of Judea, people like Mary and Joseph, for Roman taxation purposes. It was bitterly resented by the Jewish people. The Census of Quirinius is clearly dated after Herod’s death, while Lukes’ Gospel places it within Herod’s reign. Perhaps Luke sought a reason for Jesus to be born in Bethlehem, so that he could fulfill the prophecy of Micah from around 700 BC:

(All vanish except the archaeologist and then the angel appears)

Angel : "But you, Bethlehem, though you are little among the thousands of Judah, yet out of you shall come forth the One to be a Shepherd Ruler in Israel, whose goings forth are from of old, from everlasting."

Scene 5: Joseph and Mary, Josephs sister and Donkey are in a stable. The bright light of the twin stars above shine in. Joseph speaks to his sister in the doorway.

Sister : Joseph, I’m so sorry that this is all that we can offer you.

Joseph :Sister, we will be fine.

Sister : It’s just your father – he doesn’t approve of the union… another mans…

Joseph : I will call you when it is time.

Sister : Go, get out of here, tell my eldest to bring a cloth for the baby and hot water, and pray for your wife…

(Sister hurries over to Mary and Joseph exits)

Martha : To have a child is a blessing. To bear a child…

Sarah : Esther lost two and then died in childbirth

M: Norah died with hers along with the child.

S : I lost one and I was so sick with fever after another I almost died

M : Elizabeth lost three so her husband divorced her.

S: The other Elizabeth died but the child survived.

Shepherd  : We are the workers of the world, not the wise men….

Archeologist (appears): The first century was a time of amazing cultural exchange amongst a scholarly elite… (then disappears)

Shepherd : …Shadup. We can’t even afford the ceremonies required of our own religion. We are too poor to reconcile to God. We keep our head down amongst foreign cultures. We barely look up in our own.

If there is any God behind it all, any single authority, law or will that controls our destinies, it has absented itself from our affairs. Honestly it is preferable to me that only dumb laws determine our fates. Otherwise my suffering means nothing to our creator.

Angel  :Be quiet. I have a message for you. The wise will have to find their own way but you are being summoned. Today in the town of David a Savior has been born; he is Christ the Lord who you have cried out to. Go and you will find him wrapped in cloths and lying in a manger.

This is my child who has come to set fire to the earth. For those who are now last will be first and those who are first will be last.
Glory to God in the highest, and peace to those on whom his favor rests.
Posted by Tony at 7:36 PM