A current cry for help. 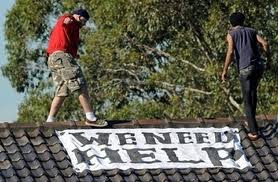 We are not independent thinkers as a species. We all tend to check in with people around us about what to notice and how to interpret information. When everyone is scurrying for cover we at least look up and check if a storm is coming. But if nobody else is alarmed we don’t worry ourselves.

This tendency can cause problems. We know that a person is less likely to receive assistance when calling for help the more people around. This is partly because, before acting, people check in with others around them to see how those people are interpreting the cry for help. (After all it could just be someone playing silly buggers and calling for help from a tickle attack.) Unfortunately we check in with others surreptitiously. This looks just like a person who has already decided the cry for help is not important. Seeing that in each other strengthens that interpretation until we are all less likely to act.

Certainly this reliance on each other is something that increases when information is ambiguous or confusing. This is why when people are in trouble it can be a good idea to scream Rape or Fire rather than Help. Anything that reduces ambiguity will increase the chance of assistance. Increasing confusion however is a tactic to ensure nobody responds to the cry for help.

Who would want to increase the chance that nobody responds to a cry for help? There are three groups who would. They include anyone who might be causing and benefiting from the harm, anyone who might be in a position to help but not want to and in the broadest group anyone who is beholden to either or both of those groups and wants to keep them happy/placid etc.

Eg. If Jeremy is being attacked and calls for help;
When we are the bystanders to a cry for help this third group who just want to keep us happy, (represented above by both the hot dog seller and the parent,) are everywhere around us. They are everything that has a vested interest in us just moving in the direction we were previously going.

Does it matter if we don’t reply to a genuine call for help? There are many spiritual traditions that say it deeply matters. In Celtic paganism reincarnation is understood as the cruelest form of justice. If we ignore a call for help then we can expect to be the one ignored when making such a call in our next life so that we learn what we have done. This is similar to the philosophy of the Tarot where we are souls on an upward journey of maturity, bound to learn the hard way what we ignore the first time around. Our souls are floating back up to God and keeping them down only leads to tragedy.

Buddhism makes similar claims, sans God though. Even more explicitly in Buddhism the tragedy of an immature soul’s existence is not necessarily that we have ill health or bad luck; external causes of suffering. It is that we are like petulant children feeling our smallest woes as unbearable and our greatest pleasures as not good enough. We suffer because of our immaturity. Hence maturity of the soul is its own reward.

In Christianity our judgement for ignoring a cry for help is much more final. We are to face a reckoning in which our creator identifies them-self with those who were in need. Those who ignored the cries of the hungry or the oppressed have ignored God. They will be treated as strangers by God in heaven.

Personally I admire the ideas of the Stoics. In their philosophy our decisions in matters such as these define who we are. The question then isn’t what do we want to do, but who do we want to be, or even who are we? Are we the sort of person who doesn’t respond to a cry for help? Or are we the type who is willing to risk foolishness and danger in coming to someone’s aid? This self definition is considered more important that the “secondary” consequences of our actions, whether a heavenly reward or a better reincarnation or even the benefit to those calling for help. I know who I want to be.

Theories of identity, the soul, God and reincarnation however can be put to one side. Obviously our response to a cry for help matters to the person making the call. That person is someone as real as us and as real as our own children. It is central to our most basic awareness of social reality that we recognize our self and other people as morally similar. All our thinking rests on a presumption of sanity and this, our response to a person in need, is that cornerstone of sanity. Hence we must think from an empathy with others or not think at all.

The last few paragraphs may seem like I am belaboring the obvious. Of course it is good to help others in need. I haven’t said much more. However I hope I’m making the point that this is perhaps the ultimate concern of any ethics, whether theistic or non-theistic. By comparison, questions of whether you look after your health or keep yourself sexually pure, both of which seem to dominate our ethical discussions, are really vanities. They are selfish concerns.  I point this out so that when we ask ourselves how we respond to a call for help hopefully we can remember the magnitude of what we are discussing. This is our soul’s journey, our relationship with God, our very identity, and our sanity at stake. This ought to be the most pressing business of our lives and of our society.

There are real and pressing calls for help being made to us. One in particular has been on my mind; the cry of people who are refugees seeking a better life in Australia. Our Labour government, supposedly our left wing and progressive alternative for government, have recently been making changes to our country’s immigration policies. In particular the Australian Gillard government has pursued off-shore processing. Their new camps are designed to have deliberately inadequate provisions. The purpose of that inadequacy is to deter boat arrivals. Worst of all however is the suspension of the processing of refugee applications in those camps. This constitutes indefinite detention in conditions worse than most jails and for no crime. Indefinite detention particularly is a major contribution to suicide risk. It runs contrary to hope to have no idea of the length of your incarceration.

Let’s be perfectly clear here. This is not an untargeted attack on refugees. This is an attack directly aimed upon the poorest and most likely to be killed if they don’t come to Australia. Most applications for an Australian protection visa occur when applicants arrive by plane with valid visas. They then apply while here for asylum and stay in Australia outside detention on a bridging visa while their application is processed. They are not treated as a threat. Most of those applications however are refused as ineligible.

By contrast anyone arriving by boat can currently expect to wait for ever. Given that they are fleeing persecution they are not likely to be able to obtain visas from their countries. They are not likely to be able then to travel by plane. These are the people we mark as threats and send to offshore camps. However the percentage of these people (when their applications have been processed) who have been recognized as “genuine” refugees under Australian law is between 70 and 97 percent.

I am a bystander to these calls for help. I am looking to my fellow Australians for how they are interpreting them, as they are looking at me. Our inactivity is being read by each other as the message that there is nothing to worry about. That is helped along by our own interest in not helping these people. We have other things to do. It is easier to embrace confusion about the issue.

We are not aided in this by both our major parties sharing policy on this matter. Nothing has changed since when both major parties would have considered indefinite off shore detention appalling or since when only the Liberal party supported it. However now there is a blinding reinforcement that this is acceptable in almost any direction we look.

The long Christmas season is also about to start up. Christmas holds a range of vested interests in our doing nothing other than purchasing and partying. The Christmas sales, celebrations, tourist season, all have their own direction they want us to be heading in, towards the cash register. Even the adoration of baby Jesus operates as a distraction in this season from who needs our help. It’s just like more entertainment. On all these channels the cacophony of Christmas is going to support confusion over refugees. That confusion breeds inaction which can be filled with the consumptive action of Christmas instead.

I don’t know exactly what form of assistance I can render those asking for help. How do I, get my government to;
My confusion breeds inaction which inspires the same in others. When Christmas sucks our time, energy and excitement into its own clutches there will be very little left for this call for help. That’s unless we do something potentially unpopular and derail this Christmas with a constant search for clarity on the needs of refugees. We have our own and many others’ vested interest in confusion to challenge.

But if we do nothing who does that say we are? If we embrace these current immigration policies then what would we say to a Creator who suffers for it? What journey does that put our soul on? How sick is our society and our selves if we can do this? Given how much is at stake can we do anything but everything to end our confusion and act on these calls for help? 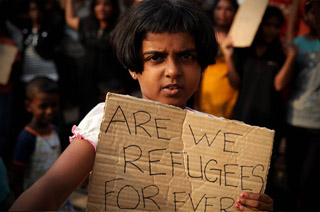 http://www.humanrights.gov.au/human_rights/immigration/detention_rights.html#8
Posted by Tony at 7:15 AM