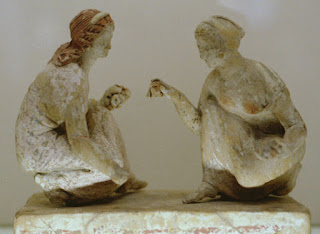 It’s a reasonably well known piece of trivia that the word philosopher means “lover of wisdom”. Less well known is that the word was coined in ancient to recognise one group of public intellectuals who did not make money directly from their arguing skills, as distinct from others who did. Philosophy’s original meaning can, therefore, be read as someone who particularly loves wisdom, above its commercial applications.

The exact nature of those historical other “non-philosophers” who plied their arguing skills for money is hard to determine. They were called “Sophists” and we mostly know about them from their detractors. They have been characterized as people for whom “reasoning” was essentially the art of “rationalizing” and from them we have the modern word “sophistry” - the practice of deceptive argument. In one interesting charge the Sophists were dismissed as rhetoricians – masters of speech but not logic, as if the two were ever so different. The philosopher by contrast was supposedly a man or woman for whom reasoning alone was the way to reach decisions – a sort of proto-scientist in pursuit of the truth – a submissive devotee of wisdom herself.

This definition of philosophy is one I’m suspicious of. It promotes such an obedient “love of wisdom” that the lover is also able to disavow the conclusions of their love. Any results of such a philosophers’ reasoning belong to reason itself, with the philosopher who advocates them merely the messenger. All this springs from a distinction from “non-philosophers” that is merely that no cash pays for their view. I find that a disingenuous claim.

A good illustration of what I mean by this can be found with one of the earliest “philosophers”, Aristotle, pupil of Plato and one of the most influential philosophers to bother Western civilization with their ideas. Aristotle claimed that women could not be philosophers. As a “lover of wisdom” he could claim a protection for his views as the product of that love. Supposedly his misogyny was not personal but simply how Aristotle saw the facts.

However Aristotle was a contemporary of Hipparchia, and even more closely connected to Lasthenea of Mantinea, and Axiothea ofPhlius who were also students of Pluto and members of the academy alongside Aristotle. Their scholarship would have had to have been obvious, to have attained such astonishingly rare recognition. Aristotle’s belief that “women should not leave the female quarters of the house” served his interests by damning these female rivals for Plato’s legacy. He became Plato’s only legitimate successor, part of a very limited pantheon of well known Ancient Greek philosophers to this day.

I rather suspect the definition of philosophy that Aristotle himself promoted doesn’t accidentally conceal the politics of Aristotle’s male interests. Instead I think the notion that philosophy is a “love of wisdom” untainted by grubby commercialism is itself a rotten act of “sophistry”. It worked in Aristotle’s case because the money exchange became the sole definition of corruption (and the definition of a non-philosopher). People failed to notice the other ways in which power can be stored and shared and advanced, in particular, Aristotle’s patriarchal power.

What is the point in describing all this – other than putting the boot to an iconic philosopher like Aristotle? The point is that it describes a continuing situation. We readily recognize that commercial interests indicate a bias. No-one ought to expect the concept of “Zero Harm” in corporate workplace safety to be much more than corporate hype. When a company like BHP uses Zero Harm (in capitals no less) to promote their corporate mission then hopefully we are not paying too much attention to this as a meaningful direction for environmental philosophy. We tend to be reasonably savvy at following the money trail to discredit paid-for spokespeople and positions.

However, just as when the word philosophy was coined, we still struggle to assert how non-commercial interests also distort the “love of wisdom”. So long as no money changes hands for a specific outcome (ie. no fee for service), we can sometimes believe that statements about obvious matters of power are not self-interested, or that we must assume them to be as such.  For example consider Doug Phillips’ (of the arch-conservative patriarchal Vision Forum) claims that “Daughters aren’t to be independent. They’re not to act outside the scope of their father.” Doug makes this claim regarding even adult unmarried daughters as part of a “commitment to affirming the historic faith of Biblical Christianity.” We might feel obliged to accept that Doug is simply reading and responding to his Bible. We might feel that without the clear evidence of a cash receipt Doug may be reasoning his way to his conclusion rather than rationalizing his interests and must be assumed to be doing so.

To that I think it’s appropriate to call bullshit. I don’t just say that because it seems culturally obvious in this case that Vision Forums’ Doug Phillips is being self-interested; his are not mainstream views even amongst most religious conservatives. Instead I want to make the far more contentious claim that no philosophy can ever disavow its interests and claim to come from an objective position. I believe that all philosophy originates from us taking an interested position rather than an objective one.

The idea that all philosophy proceeds from interests first rather than some objective place of pure reason is best illustrated by what we think about the environment and environmental politics. There is simply no objective way to say that one environment is better than another. There are microbes that live in lava vents that would vote (if they could) for a seismically unstable world. Our disagreement with them indicates we have different interests.

We can only think about our environment and how best to interact with it from a prior assumption of interests. The most obvious of these is to take an individual interest or a special interest (for all humanity). However it is not irrational to take the interests of very different living creatures into account or the ideal of a diverse and colourful planet.

I don’t believe that rationalism can be expected to shift us from a position of complete neutrality in which the concept of any environment’s value is nonsense, to the right interested position in which we can properly conceive environmental concerns. Nor do I think that rationalism can provide us with reasons to shift from one interested position to another alternative. This is why I say that all positions of interest on the environment, even one in which destruction is the goal, are equally rational or irrational.

I think if we want to call some position on the environment right or better than another we have to return to the sort of sophist arguments that philosophy in the greek tradition tried to distance itself from. I don’t mean sophist in the modern sense of dishonest. I think we simply need to use the full range of language and not just logic. In doing this we practice what the classic Greek philosophers and some "moderns" would not call proper philosophy.

Only via story, evocative rhetoric and even intuition can we be obliged to value interests other than our own.  I would also credit compassion to developmental factors such as the experience of reliable and honest relationships. I don’t believe it can be based in argument alone. For some people this is potentially paralyzing. If one position of interest cannot be verified as the true or right one with any finality in scientific fashion, and if we must take a position of interest before we engage in any philosophy, then for some people this is the end of the philosophical enterprise all together, as a valid search for truth.

It isn’t, in my opinion; it is merely the end of absolute certainty. The love of Wisdom has been mistakenly believed to be the same thing as the disinterested pursuit of certainty for so long but it's not. It's something that involves much more of ourselves than that - all of our interests. Unlike Aristotle we should be prepared to admit them.