Should the Catholic Church be singled out over child sexual abuse? 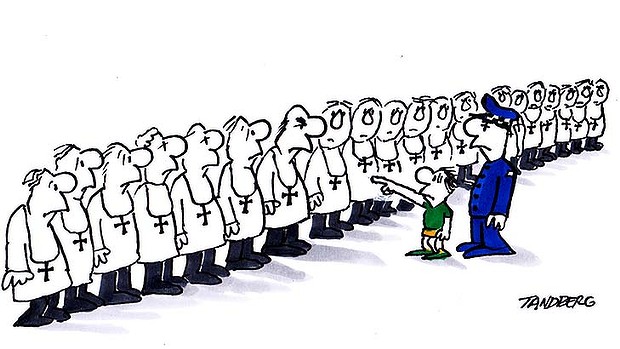 However Patrick Parkinson, who reviewed the Australian Catholic churches own processes for dealing with child sexual abuse and who is considered by Pell himself to be an expert in this field in Australia, disagrees. He stated to Radio National  that there are “roughly six times the number of clergy or religious offenders (in the Catholic church) as in the rest of the churches combined” and in his view “the Catholic church has a huge problem with child sexual abuse, a problem that is disproportionately higher by many fold than any other institutional organization working with children.”

Other sources confirm the Catholic Church’s disproportionate responsibility for child sexual abuse. “Victoria police numbers suggest it is 10 times the level of abuse among the Anglicans and Salvation Army” according to Adam West of the Sydney Morning Herald.

It might be possible that this is an extraordinary and unfortunate matter of chance. Child abusers congregate. They form networks. Therefore one should expect incidences of child sexual assault to cluster – in one service more than another, in one town more than another, and in one institution more than another. It may be that the Catholic Church was unlucky enough to be chosen by those seeking to abuse children almost randomly amongst places where they could access kids. Then they recruited others like them and the abuse became epidemic in some quarters.

It is also possible that the Catholic Church was chosen specifically. Maybe the esteem given to clergy, maybe the celibacy requirement, maybe the male-only leadership, gave people with a desire to sexually abuse children a better cultural cover. Maybe there is even something in the Catholic Church’s concept of its own authority and its disdain of questioning (even by its own members) that sponsors, or worse produces, child abusers. Maybe it is something as simple as the greater involvement of Catholic clergy in education and direct contact with children producing greater opportunity. If we are serious about preventing child abuse then we have to ask these kinds of questions.

Obviously if there is a problem with the Catholic Church that promotes or covers sexual abuse it is not exclusive to them. Abuse has and does occur in non-Catholic institutions. It’s like how there are a few women who abuse children so we can’t say this is a problem exclusive to men. However the problem is so overwhelmingly male that to not talk about the gender dimension is grossly foolish, if we are honestly trying to understand it. You understand problems partly by looking at the patterns of their incidence.

The same attitude should apply to looking at the Catholic Church specifically in this matter. If there is, as it appears, disproportionate abuses of the kids in Catholic care, that requires us to focus attention there.

That focused attention should be done critically though. We don’t have really hard statistics on how many people in the general population sexually abuse children. We are relying on anecdotal and police reports coupled with a few limited studies. Although there are (under-reported) figures of how many victims there are, the number of general abusers per capita is much harder to find. Therefore when Professor Cahill of RMIT says that one in twenty Catholic priests will commit sexual offenses against children  we don’t really know if this is higher or lower than the general male population.

What we can reasonably guess is that familial sexual abuse is likely to be even more under-reported and even tragically disbelieved due to:
a) conflicting loyalties amongst family members (particularly a factor in sibling abuse);
b) lesser media interest because the risk of abuse it represents is less “public”;
c) lesser media and police interest because each abuser involves a fewer number of victims (though just as many occasions of abuse).

Taking this into account encourages caution before concluding that something like celibacy in the Catholic Church leads to or even just correlates with higher rates of abuse.  Even if men without families have exactly the same rates of committing sexual abuse as men with families, a tragic likelihood is that the latter group will evade detection easier. That could be a better explanation of higher reported rates of child abuse by Catholic unmarried clergy than anything else.

I want to understand the sexual abuse of children. I want to know what developmental, social, political and even biological factors might contribute to a person committing this crime. I’m serious about that because that knowledge just might help prevent some of these crimes. That is the goal to prioritise.

I also don’t like the Catholic Church hierarchy, its undemocratic structure and its patriarchal and conservative influence. Archbishop Pell on the other hand wants to defend those aspects of his Church and to preserve its influence on society. Both of us should forget those agendas when considering the problem of sexual abuse. We need to banish from our minds any interest in the Catholic Church’s reputation at all – whether to tarnish or redeem it.

If we are solely interested in understanding sexual abuse against children we should focus on the Catholic Church if the data points us there and not if it doesn’t. For the moment there seems to be reason to do so, but with strong reservations that we may be overlooking the wider problem of familial sexual abuse.