Why are Christians such a bloodthirsty lot? Part Two

The last post in this series discussed Christian violence against non-Christians particularly Pagans and Jews. One possible explanation was given for it; the Unpayable debt of salvation. Certainly that explanation needs to be considered as one among many.

I deliberately chose to outline a motivation that explained the particularly Christian nature of Christian violence against non-Christians. As I make a similar choice with this post it needs to be said that there are plenty of economic and capricious explanations for violence committed by Christians. I have good reasons for not making those reasons a larger basis of this series.
This series is about how Christians have rationalized and inspired violence from their tradition because only a rationalized and inspired violence explains the systemic place of violence in the history of Christianity. The deliberate targets of Christian violence, the wide participation in violence and the resilience of official violent Christian institutions force us to accept that violence in Jesus’ name is not just a few bad apples.

There’s also a problem with treating any systemic violence as just motivated by self-interest. This is one other way in which Christian violence is dismissed as being not particularly Christian, merely human. Yet violent acts are usually at great cost to the perpetrator. It is servants of violence (rather than those who are served by it) who are crucial therefore to its sustainability. If the rich had to fight their own wars we would probably not have any. If only the self-interested believed in Christian violence it would have been a short lived affair for the same reason. We can see this in how Crusading knights bankrupted themselves in order to participate. It is also evident in how Dominicans and Franciscans made up the ranks of the Inquisition. They were deeply pious, forsook fame and were under a vow of poverty. They tortured without hope for personal, earthly gain with exactly the same zeal that they preached.  Violence in Christian history has been promoted and accepted as a Christian moral imperative.

That isn’t to say that such violence is “true” to Christianity. Perhaps certain Christian motivations to violence only work because a Christian doctrine is taken out of context or misunderstood or treated in isolation. Perhaps all these violent “Christianities” are in error. That’s not inside the purview of this series. It still remains that a Christian theology has had to rationalize and motivate violence whether “rightly” or “wrongly”.

How strange, then, is this post’s topic of Christian violence against fellow Christians? At first glance the tendency to fracture and then to fight amongst Christians can’t be the product of Christianity itself. This would seem to contradict the intuitively correct saying of Jesus that a house divided against itself can’t stand. It would also seem to be at odds with the principles of social evolution, contrary to any sensible purpose we can imagine. Surely only something preceding (like the badness of humanity) or external (like the machinations of false Christian rulers) could produce this wasteful propensity to violent self-persecution? In fact I can identify four elements necessary to continually create this conflict. All are imbedded in orthodox Christian world views.

The Fuel for the Fire. 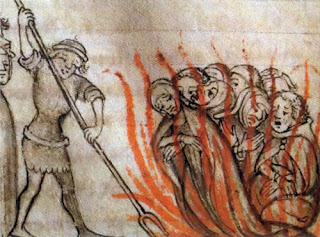 Christianity has always been rift by distinctions. As far back as the Apostle Paul’s letters we see such conflict in the church. In fact Jesus himself has to deal with concerns over the authority to work in his name. (Mark 9:38) There is no period of Christian history without division and difference.


These conflicts continue to this very day. Protestant and Catholic and Orthodox and Calvinist, Armenian, Universalist and so on are just some of the possible stripes of modern Christian that exist. Each one will tell you adamantly that they are the real Christians. Not only that, but each theology claims to be absolutely evident. Only the Gnostics, a recurring heresy (though not to themselves), claim their beliefs are not obvious from a plain reading of scripture or history.


What all these splits over doctrine and authority (usually connected themes) indicate to any outside observer is that Christianity is open to diverse interpretations. It is evident that no one theology is clearly evident. This is a natural consequence of the Christian scriptures. For one thing there are several authors, none of whom were Christianity’s ultimate voice of authority, Jesus. For another there is always uncertainty about how to weight passages that seem to go against each other. Once we include the entire Old Testament as Christian canon as well then confusion is inevitable. Rabbinical schools seldom teach a single final interpretation of even one book in the Jewish Bible, the Christian Old Testament.


If any Christian reader doubts that this underlying uncertainty exists or that a contrary certainty is insisted on throughout Christian history I urge them to look into what has constituted a heresy; some of the Christological distinctions are so fine that their point is lost on us and like most heresies they can base themselves in scripture somehow. (Wikipedia contains a reasonable listing.)


Just as uncertainty forced into certainty plays out across churches it also plays out in the hearts of Christians. This is usually done by personally reciting creeds or articles of faith. Many people accept what they are told about metaphysical matters and just receive the faith as delivered. If it changes, they change. I find this a much maligned but perfectly reasonable position. After all which heresy is worth burning at the stake (and impoverishing your family) for? Seriously, did I mention the burning?


The most pious however want to truly hold the faith. Yet deviations of interpretation don’t cease to be natural in the individual. The problems with the text and with authority are still there. Internally as externally these must be suppressed by sheer bloody will or by claims to have divine inspiration.


Then because we are consistent creatures what we do to ourselves we do to others; self-loathing people become bullies. The Christian who demands commitment to doctrinal precision, given what they have to work with, fights a brutal internal war. They must chastise their internal heretics constantly. Obviously when they encounter that critic outside themselves it won’t always be pleasant. Hence greedy popes may order doctrinal violence, and ordinary people may even enforce it but it is the most devout who make it their lives work.
This is the fuel that drives the Christian persecution of other Christians. It burns hotter than the desire to persecute the Pagan or the Jew precisely because there is a smaller internal Pagan or Jew voice to be suppressed. Consider the bizarre story of the Crusades. Although we often think of them as wars between Christendom and Islam, the first three crusades were between Christians. Not till the fourth crusade did the Western church urge its adherents to go to war against the growing Muslim threat. This was in response to a plea to defend Christian pilgrims and lands in the by the Eastern Church. However the Western army diverted its own path to sack the capital of the Eastern church, , destroying it’s Christian churches instead. The fourth crusade never even made it to the but expressed its violence against its more similar religious rivals.
This makes sense given that whether or should be the Pope’s seat is tenuously provable by any means. The tenuously provable must be strenuously insisted upon in order to be maintained and so Western Christians had been fed the worst propaganda against their Eastern cousins for the longest time. Most Christians would have internalized this process if only to fit in with their neighbours and the result is the sacking of even when contrary to papal decree. The intra-Christian violence was too self-regulating to be just switched off from above.


We see the same fuel for violence wherever certainty is painted over uncertainty including other faiths such as Islam. We also see the same self-less prosecution of violence. Persecution becomes an act of faith as it is internally. Personally the persecution of Christian heretics by Christians strikes me as akin to the Cultural Revolution in or the doctrinal purity of the Bolshevists. These were equally ideologically absolutist movements. They produced absurdist outworkings of their certainty to match the Inquisition. Just as in these communist examples however this fuel alone is not sufficient to start a fire. No body burns without three more key conceptual ingredients;
-          The Forces of Light and Darkness
-          The Weak who need protection
-          The choice of Heresy
Posted by Tony at 8:46 PM